Learn how to Add a Backdrop to Your Snapchat Snap using some cool app features that will let you customize your image. So have a look at the complete guide discussed below to proceed.

Snapchat twirled the whole world when it was released with so many image effects that were never seen before. This tremendous action by the developers was hugely accepted by the people, and the result was that the Snapchat user base reached millions. Now, after a long time since the release of Snapchat, numerous additions have been added to its functionality and features.

This has become the never-ending trust by the developers, and the users are assured to be provided with the support of more upcoming lures. Recently, Snapchat has added a backdrop feature to the snap chat that can be used to interchange or replace the background of the snaps and show an interesting effect side-by-side.

The usage of this new feature cannot be understood easily by the people on Snapchat, so on behalf of this, we thought to provide the full detailed working of this Backdrop adding function. If you are the one who is looking for a way for doing so, then you can learn it whole inside this article. Just keep in mind to read this full article!

Also Read: 10 Apps That Will Transform your Android

Add a Backdrop to Your Snapchat Snap

The method is quite simple and easy, and you need to follow the simple step by the step guide that will help you to implement this.

Also Read: How To Show Your Photo In Google Search Results

1. The first step is to open Snapchat, and then you need to take a snap of your face or anything else. Working with snap chat is not like working with any camera app only, so you won’t find any issues with this very first step. To Go to the next step, you will have to confirm the image you clicked, which should look best so that the backdrop addition would not affect its vibrancy. 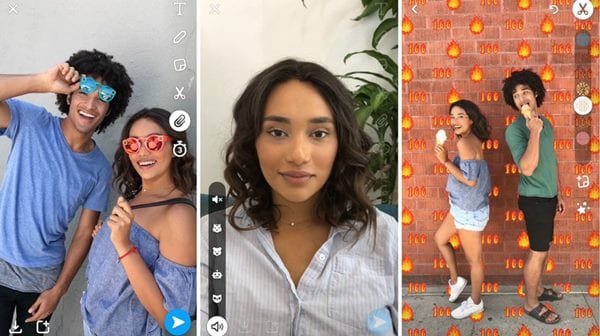 3. Now, through the list of available backdrops, you will have to select the one suitable for your photo. Don’t worry; as the images appear on the top of your images, you can change them in the next steps. Using your finger, touch and rub on the surfaces of the images you wish to make appear in the front of the backdrop, and tap on the scissors icon again.

4. Doing so will take you to the next screen to share the created images with your friends. Now, as you know, some issues might arise when you turn to change the backdrop of images, so it is highly required to change the issues. This can be easily done by reverting the changes that you made. Finally, use the above feature to make as many images as possible!

Removal of the background images is difficult, and perfectionists use various high-end tools to attain the correct visibility after the changes. The snap chat has made it enormously easy for anyone to change the backgrounds of portrait images. The peak advantage of the Snapchat Backdrop effect is that it replaces the background of the selected parts of the image and applies an unusual effect.