After showing a model to be determined next to a mysterious holographic cube recently, AMD finally launches the Radeon RX Vega graphics family.

These charts are based on the new architecture Vega of AMD, the last scheme the company endowing them with enough power to meet the current market models like the 1080 GTX and above.

Among its specifications we have a manufacturing process of 14 nanometers, a performance of up to 25 TFLOP/s in floating point operations, an HGM2 memory architecture and NCUs, which can execute up to 512 operations of 8 bits per clock cycle.

We start with the cheapest model in the series. The Radeon RX Vega 56 comes with the following features:

This model is aimed at first-time players, who want to start in the gaming world with cheap graphics without giving up power. This model will arrive on August 14 and will cost between $340 – $440.

The high-end models have similar characteristics, differentiating themselves in the refrigeration system among other things:

As we can see, physically there are no differences except the absence of the fan, as it is logical, in the version with liquid cooling. It should be noted that the Radeon RX Vega 64 Air Cooled is the only graphics available in both models, with or without the aluminum sheet. 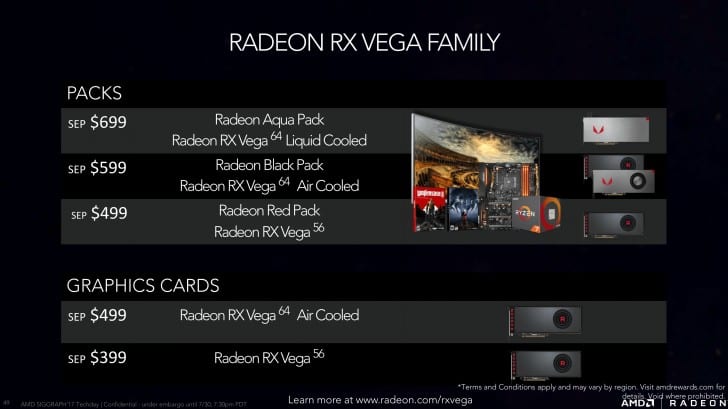 All models include Radeon FreeSync 2, support for H.265/HEVC, HDMI 4K60, DisplayPort 1.4, TrueAudio Next and VSR.

AMD has announced different packs, called Radeon Packs, which include graphics with a Samsung CF791 34-inch WQHD Curve monitor, a discount of almost $100 on a Ryzen 7 with the motherboard and 2 AAA games, namely Prey and Wolfenstein II.

So, what do you think about this graphics cards and offer? Simply share your views and thoughts in the comment section below.