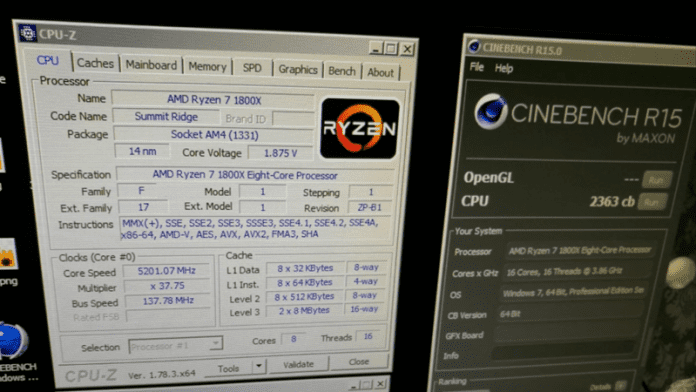 Well, Advanced Micro Devices (AMD) had already announced the AMD Ryzen 7 processors which will feature eight cores and 16 thread. These chips are said to outperform Intel’s bests, and at the same time, the cost will be almost half the price compared to its competitors.

Well, just a day after the release, AMD’s new Ryzen 7 1800X which will be available at $399, and it performs 39% better than Intel Core i7 6800K. The base clock speed will be 3.4Ghz, and the boosted clock speed will be 3.8Ghz has broken the world record for performance in CPU benchmarking suite Cinebench R15.

Group of overclockers has put AMD Ryzen 7 1800X chip through the test in Cinebench R15. The chip was cooled using LN2 (Liquid Nitrogen) to ensure the chip remained operational at -200°C.

Group of overclockers have pushed the AMD Ryzen 7 1800X to 5.2 GHz across all eight cores and scored 2449 Cinebench points, beating out the previous world record of 2410 on eight core processors. One of the YouTuber has grabbed the screenshots. You can watch the video here: