The current landscape of mobile telephony would be inconceivable without Android and iOS. Both operating systems came to bring the concept of “smartphone.” The tech giant Google has managed to dazzle millions of users, and we must thank the minds that made it possible. Like Andy Rubin considered one of the fathers of Android.

Recently, Andy Rubin plans to launch its high-end smartphone. It comes from the hand of Essential Products Inc., a company that Rubin is just starting and that seeks to develop targeted both the mobile environment and the household devices.

The father of Android will have a new child

This mobile operating system was landed in 2003 and was acquired by Google in 2005. Andy Rubin was working on Android from birth until 2014. In October, the search giant launched its line of products “Made by Google,” among which are the ambitious mobile Google Pixel and Pixel XL.

They are precisely the Google Pixel against which the next Rubin smartphone will seek to compete. So, it will go straight to the podium of high-end, at least that is what they expect. Not in vain, most of the team that will develop the device are former workers of Google and Apple, Experienced people with extensive knowledge of the sector. So far, Rubin has a budget of $ 300 million through private financing.

There is still no official data from Essential FIH-PM1, which is the code name that receives the first smartphone to be expected to launch by Andy Rubin. However, we know some of their characteristics, thanks to the data sheet that appeared in Geekbench on 27th December and until now was going unnoticed. 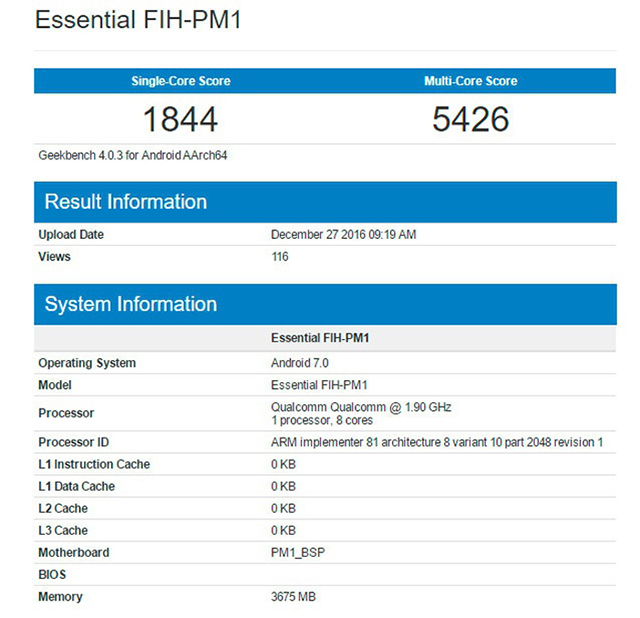 As I mentioned, this phone will be a high-end, so hopefully it will be powerful. Moreover, it seems that it will mount a processor Qualcomm Snapdragon 835 64 – bit.

This chip, which will be present in the Galaxy S8, was introduced in November and is manufactured with the architecture of 10 nanometers. Among the advantages over the previous model this model will provide 27% more performance with battery consumption 40% lower, a load that is 20% faster thanks to the inclusion of Quick Charge 4 or support for USB Type-C.

The Essential FIH-PM1 will arrive with Snapdragon 835 along with the 4GB of RAM and will also come running Android 7.0 serial Nougat. However, it is rumored that it could integrate a 5.5-inch screen that would have a pressure sensor and of course fingerprint reader.

These are the data that are known at the moment, but we will keep you informing about all the details. So, what do you think about this Smartphone? Share your thoughts in the comment section below.