The tech giant Apple is making extra efforts to maximally protect any potential leakage over the details of its new device, iPhone 8. However, sometimes it can not avoid it. Hence, recently, Apple HomePod firmware confirmed the iPhone 8 Bezel-Less Display, Facial recognition.

Every year we are looking forward to the introduction of Apple’s new mobile phone. This time, in addition, is the tenth anniversary of the company, so that interest in the new iPhone 8 is on very high mode and surprises are expected. The tech giant Apple is making extra efforts to maximally protect any potential leakage over the details of its new device. Although sometimes it can not avoid it.

This is what has happened in the last few hours when we have known by a mistake of the tech giant Apple itself the final design of the iPhone 8. Not only that, it has also been confirmed that the new model will have a facial recognition sensor, one of the features that have been rumored for some time and that will change the way we will unlock our device – now it is more than likely that the TouchID button disappears Or fingerprints.

In the last few hours, we have heard two important news about the new Apple iPhone. On the one hand, Shashleaks has filtered the possible manual of this phone where we see what will be the final design of the iPhone 8. The funny thing is that it is ready, still missing a few weeks before the presentation of the new Apple iPhone. But the similarities with previous smartphone manuals lead us to suspect that it may be the original or a draft – denying the alleged problems to have this smartphone on time. 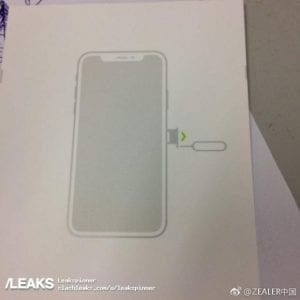 In the cover image, we see the final design of the iPhone 8 and an instruction on installing the SIM card. Thanks to it we can confirm some of the main innovations of the iPhone 8: the screen without frames with space in its upper part for sensors and frontal speaker, as well as wireless charging.

In addition to this, we have also discovered, rather confirmed, the presence of facial recognition system. It is not the first time that this rumor takes force since weeks ago a possible patent of Apple showed the 3D recognition in the new mobile.

This time we have known the existence of a project called Pearl ID, a log of errors of this system. These errors indicate that it is an iPhone 8 facial recognition system capable of detecting faces at different angles and positions.

The new features of the iPhone 8 have been filtered by the HomePod firmware – Apple’s connected speaker and announced last month at the WWDC – and located by developer Steve Troughton-Smith, who has posted it on his Twitter account (@stroughtonsmith).

I can confirm reports that HomePod’s firmware reveals the existence of upcoming iPhone’s infra-red face unlock in BiometricKit and elsewhere pic.twitter.com/yLsgCx7OTZ

At the moment, we do not know in detail the accuracy and precision of the face recognition system of the iPhone 8. What we can see in the code is that instructions are included such as “too close to the camera”, “too far from the camera” Or “detected face”. In addition, the face recognition of the iPhone 8 will be done by infrared, which allows its use even in dark areas or in the dark.

Remember that it is not the first time that the tech giant Apple “advances” images of its new mobile devices. It already did last year during Keynote in September, where we could see some images of the iPhone 7 on Twitter before its official presentation.