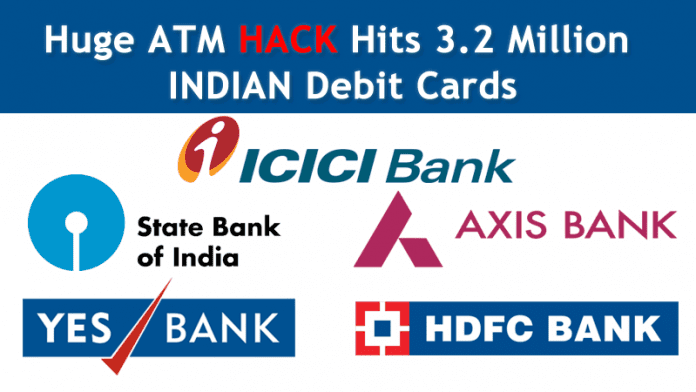 The most interesting thing is that all these exposed cards were largely issued by the State Bank of India (SBI), Axis Bank, ICICI Bank, Yes Bank and HDFC Bank. But, the question arise here that how this severe incident occurs? Hackers used the malware that they already injected into the Hitachi Payment Services’ systems, through which they able to steal 3.2 million debit cards’ details and confidential information.

However, it is still not yet clear that who is actually behind this cyber attack, which simply appears to be one of the biggest cyber attacks that the India has ever encountered. Still, at present, it is only known that a number of victims who were actually reported some unauthorized transactions that were made at various locations in China.

The Managing Director of National Payments Corporation of India (NPCI), AP Hota said that “We have received complaints from banks about debit cards being used in China which aroused suspicion”. Also added later that “Though most of the suspected fraudulent transactions happened in the Visa and MasterCard network, we thought a whole a forensic audit of the entire network will help us find out where the compromise happened”.

While the banks are involved in taking major steps simply to block all the affected debit cards and replace them with the new secured one, some banks have even suggested to their customers to change their ATM or Card PINs periodically simply to counter misuse or to avoid such unexpected incidents.

However, currently, the Bangalore, India-based payment security specialist firm “SISA” has been appointed for the legal investigation of the security breach. The Economic Times, claiming sources has reported that it will take around six weeks simply to detect the malware infection. As we all hope for the best so that it will be able to get to the root of this incident and help out all the local banks simply avoid such attacks in the near future.