Wireless charging is a system that has evolved a lot in recent years. Recently, the Disney Research turned a whole room into a wireless charger, just as the tech giant Apple explores truly wireless iPhone charging.

Disney Turns A Whole Room Into A Wireless Charger

Wireless charging is a system that has evolved a lot in recent years. We can already find many mobile phones that incorporate this type of technology. However, its great drawback is that it is still necessary to place our device on a surface which has to be connected to the current.

Apple for its part, is working on a system that allows long-range wireless charging, something that has no Android phone has yet. In fact, this technology could be included in the next iPhone as well, as all the rumors suggest that the new phone of the company based in Cupertino can be loaded without using cables.

The future of wireless charging by the hand of Disney 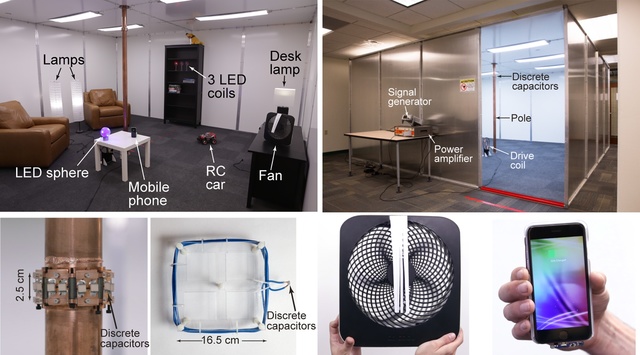 We have now seen a project being carried out by Disney Research that could be a real revolution in the field of wireless device charging. This is a system that would allow when we enter a room, our phone will begin charging wirelessly.

The method is called the Quasistatic Cavity Resonance (QSCR) and has been tested in research laboratories at Disney Research center. For this system to work, a room whose walls, ceiling and floor are made of metal is necessary. This would allow uniform magnetic fields to be generated to provide power to both mobile devices and lighting systems or fans.

The QSCR system is, according to its creators, fully scalable and can be used in small devices, as well as in large areas. In the different metallic parts of the room are placed coils that operate at the same frequency as the magnetic fields. The currents induced in the structure are channeled through the capacitors, which isolate the entire room from electric fields that could be harmful.

In the simulations carried out by the project managers, it was possible to transmit up to 1.9 kW, respecting the safety imposed by the FCC. Thus, Absorption Rates, that is, the energy absorbed by the human body, which may be hazardous to health, are not reached. According to the studies, those 1,900 watts could charge 320 mobile phones simultaneously.

The room used to perform the tests was specially designed to carry them out, but experts believe that it could be adapted to other structures by using paint with conductive properties or modular panels. The system has an efficiency of between 40% and 95%, depending on the position in which the user is.

This system designed by Disney Research can be an authentic revolution in the way we have to power our devices. It could mean the end of the cables to charge our mobile phones, computers and tablets, something that all lovers of technology have dreamed for years.