We all know very well that in recent years, the theft of databases to Internet companies has grown exponentially. Many small websites and even large companies have been affected by vulnerabilities that have finally allowed hackers to take over their users’ databases, databases that quickly began circulating on the network. However, now according to the latest reports, recently, Mozilla just launched a new Firefo tool that will simply tell you when your passwords are hacked.

In recent years, the theft of databases to Internet companies has grown exponentially. Many small websites and even large companies have been affected by vulnerabilities that have finally allowed hackers to take over their users’ databases, databases that quickly began circulating on the network.

To help us protect ourselves, platforms like “Have I been Pwned” have gained popularity, allowing us to know if our data circulates through any of the stolen databases. Now, Mozilla wants to make it even easier to check these leaks, and for that, it has launched Firefox Monitor.

Announced in June and launched recently, Firefox Monitor is a new platform launched by Mozilla that, connected to the database of Have I Been Pwned, allows us to know, simply by entering our email, if any leaks have leaked our personal data and, if so, what types of data are those that have been compromised.

Also read: How To Protect Mozilla Firefox Browser With Password

This platform is free for all users, and we can access it from the following link. Once we get inside, to check if our data may be circulating through the network, what we should do is enter our email in the box that appears to see at the moment if the mail appears in any of the stolen databases recorded. 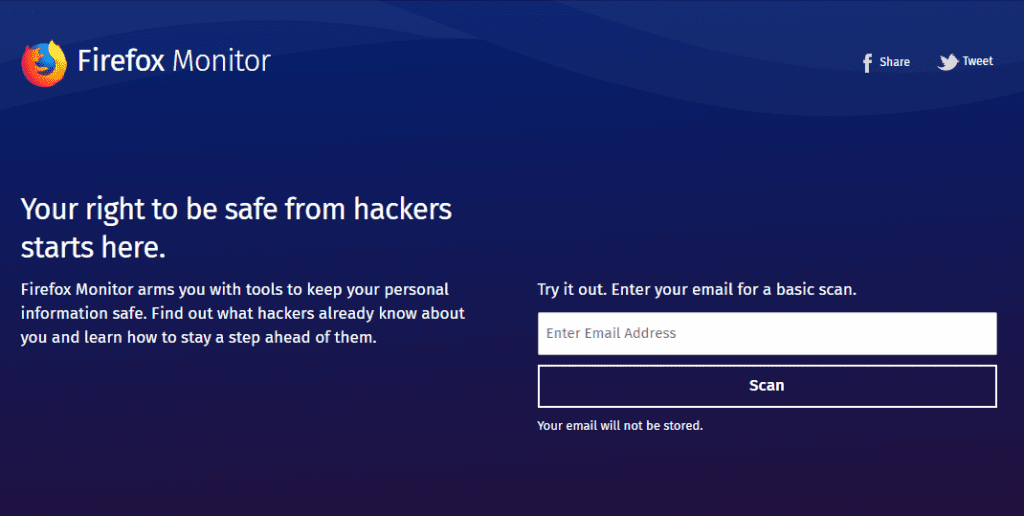 In addition to being able to perform a manual check, in which, in addition, our mail is not stored, we can also subscribe to this platform to register our mail so that, in case a new data theft is carried out in which our data is included, Firefox Monitor notifies us immediately without having to perform manual checks.

In case our data has been stolen, Firefox Monitor will show us the website from which they were stolen when they were stolen and the type of data (names, addresses, passwords, etc.) that have fallen into the hands of hackers.

In case our data is circulating in a stolen database, what we should do is make sure to change the password as soon as possible of said or the affected website, and among all the sites in which we use the same password so that nobody can get access to these sites without permission.

Also read: How to Migrate all Data from Chrome to Firefox

In addition, as we are, it is also advisable to take advantage to use a secure, robust and unique password, as well as update the security questions and answers, for what may happen. A password manager like 1Password, KeePass or LastPass will help us with this task.

Finally, whenever possible, it is advisable to activate 2-factor authentication so that, if someone tries to connect to our account, they can not do it without the random code that we receive on our mobile. So, what do you think about this? Simply share all your views and thoughts in the comment section below.