Today everyone wants to bypass the security key window of wifi and access the wifi around them. Today most of the wifi is encrypted with the WPA and WPA2 security these securities are somehow vulnerable to some wifi hacking attacks as the WEP is the most secure encryption of Wifi that are most used by the people who have knowledge about hacking and their attacks. So in this post, I will tell you the vulnerability of this encryption and how to hack Wifi by hacking WPA and WPA2 security over it. Just read out the below post to proceed.

Also Read: How to Hack Wifi On Android

Here is the method to hack wifi WPA/WPA2 security using WIFIPHISHER. There are many hacking tools that are available on the Internet that can hack a secure Wi-Fi network but this tool is published by George Chatzisofroniou that automates the multiple Wi-Fi hacking techniques and make it slightly different from all others. Also, George Chatzisofroniou published this Method for Hacking WPA/WPA2 Security with a WiFi social engineering tool that has been designed to steal the credentials from the users of secure wireless networks.

Wifiphisher is one of the security tools that mounts fast automated phishing attacks which are against WPA networks and in order to obtain all the secret passphrase of the network. This is a type of social engineering attack that not work like other methods as it does not include any brute forcing. It is a very easy way to obtain the WPA credentials of users.

This software works in Linux operating system and is licensed by MIT license.

Three Phases of this attack is listed below:

By this server, attacks are being done and by this application, the WPA passwords get cracked by the server. So better is to be safe from these types of attacks by Using the WEP encryption method to secure your wifi and prevent such attacks. Don’t forget to share the posy and leave a comment if you have any related queries with this. 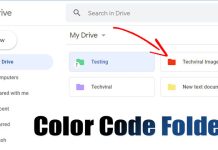 How to Color Code Folders in Google Drive

How to Change Default System Font on Windows 11

How to Find MAC Address in Windows 11 (5 Methods)

How to Enable Do Not Disturb Mode in Windows 11

How to Silence Unknown Callers on iPhone (2022)

How to Recover Deleted Notifications on Samsung Galaxy Devices