Undoubtedly, the year 2017 marked a new stage in the creation of new cryptocurrencies. It is incredible the boom that has been released since the departure of Bitcoin, many companies around the world are creating their own virtual currency, hence, as a result, Kodak just launched its own cryptocurrency.

Kodak Just Launched Its Own Cryptocurrency

Undoubtedly, the year 2017 marked a new stage in the creation of new cryptocurrencies. It is incredible the boom that has been released since the departure of Bitcoin, many companies around the world are creating their own virtual currency and this may represent a problem or an advantage for the economy depending on how you see it.

Recently, we told you about the Telegram cryptocurrency. Now, today we will talk about Kodak, yes, the same company that went bankrupt for not having the visualization of the new modern era of photography.

Now, we will have to refer to Kodak as the new company focused on digital imaging. However, the market has never yet finished understanding how it plans to return with that motto. But despite this, the company continues and already announced its own cryptocurrency that we say at once, looks very good.

KODAKOne will be the platform based on the blockchain, which will allow users to register the authorship of their photos. In addition, its operation is quite practical, since it will work with new jobs and old ones too. Thus, the information will always be available and associated with its true authors.

Kodak, now sees with new eyes and made the future. The authors will be able to license their work. Thus, it would generate a good response and genuinity for the work of a photographer. 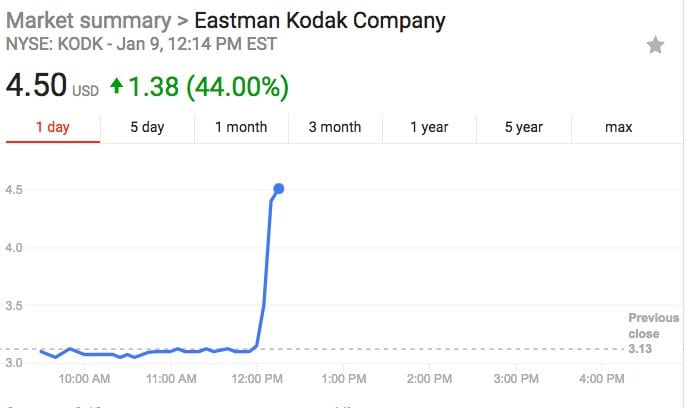 The idea is that a professional or amateur photographer can sell his/her work in a confidential and safe way; something that many platforms on the Internet do not have. These payments can be made with the KodaKCoin cryptocurrency.

As mentioned, security is an important section in this platform, because if someone makes use of the photos already registered and without any permission, the cryptocurrency can manage the license and reward its creator; which is really a fair move.

The displacement of KodakCoin will take place next January 31, and in that time, large investors from the United States are expected. However, there are still many doubts as to its true market value. In addition, you can now access the website of the new cryptocurrency.

So, what do you think about this new cryptocurrency announced by the well-known photography company, of course, I am talking about the Kodak? Simply share all your views and thoughts in the comment section below.