We all know very well that the giant video platform YouTube which is owned by the tech giant Google has become an excellent streaming video platform that has much to offer both consumers and the creators of the published content. However, today in this article we will tell you about an open source YouTube alternative to beat censorship.

As we all know, the giant video platform YouTube has become an excellent streaming video platform that has much to offer both consumers and the creators of the published content.

Despite all the advantages that the platform owned by the tech giant Google makes available to us, at the same time it hosts a series of internal rules that directly affect the aforementioned creators, something that is not always liked by everyone. As for an example, this week, several YouTube channels were blocked all over the world, means that all their videos were no longer available to the millions of visitors of the portal.

These belonged to various developers, but this is not an isolated case, since it tends to happen with some frequency in the Google platform, and it must be borne in mind that many of these blocks are carried out by content not allowed by its subject, or for reasons related to copyright.

However, in this recent case that we mentioned, the problem was more complicated, since the decision was related to a new license agreement, among other things. While some important channels have been restored, others continue to face similar problems.

Here, YouTube informed those affected that it is a technical problem that engineers are trying to solve, meanwhile, all their videos and many other channels are being inaccessible for almost a week.

But in short, whatever the problem is, it is clearly a very important mistake. Although initially YouTube probably has no intention of censoring these channels in particular, what is demonstrated is that the creators of video content, a key element in the portal, can begin to distrust it.

After carrying out some complex development work, they find a service over which they have no control and which, for no apparent reason, removes its content, erroneously or not. That is why we can say that there are other powerful alternatives that these creators can use, as is the case of PeerTube, a platform that offers some interesting advantages over the giant video platform YouTube.

In fact, when one of the companies affected by the failure of YouTube that we have mentioned, Blender Foundation, saw all their videos blocked by YouTube, made the decision to give an opportunity to this alternative, PeerTube, so in a matter of hours, Blender had a fully operational streaming portal over which they had full control .

Well, for those of you who do not know the PeerTube streaming video platform, it is interesting to know that it is an online service that allows any user to configure their own personal video streaming website. This can work independently, but it can also be linked to other instances of PeerTube, all in order to have a wider and more global reach.

One of the most interesting aspects of all this is that its operation is based on P2P support, a platform that has been with us for a few months and that, little by little, wants to gain a foothold in the multimedia streaming sector.

In fact, it is one of the great beneficiaries of the constant failures faced by YouTube, since the content generators see PeerTube as a good alternative. Now they set an example of what happened with Blender, which, from their point of view, illustrates their main objective: autonomy and independence of external platforms, since they want to give control to users. 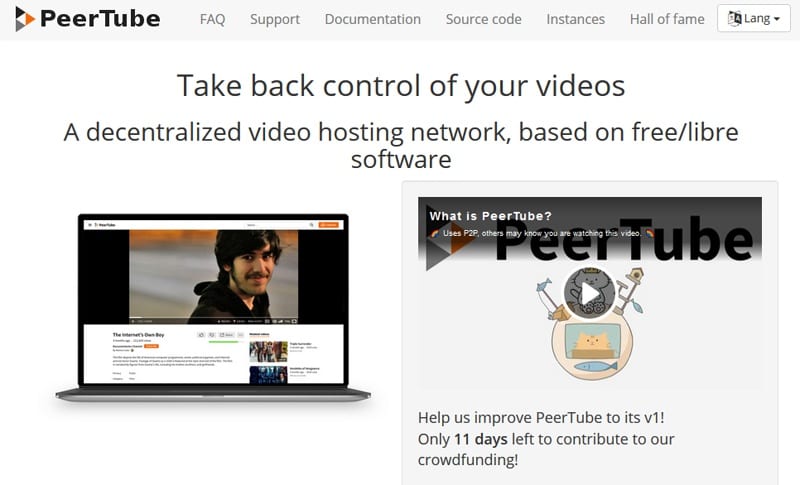 Also note that PeerTube comes with integrated support for WebTorrent, which means that visitors can also contribute their bandwidth to streaming video, something that can be very useful if a content goes viral, for example.

At the same time, it uses the ActivityPub protocol, which is also used by the popular social media software Mastodon, which helps to grow the library of available videos. In addition, it is designed in such a way that each creator can determine their own set of rules, adjustments, and moderation policy, among other customizable parameters.

In this way, the idea behind PeerTube is to allow content creators to regain control over the videos they share with the rest of the world, thus helping to avoid censorship in the broadest sense of the word, and also the problems of blocking videos that are becoming more common in the giant YouTube. In addition, it is possible for developers to make their creations completely free and open.

But of course, for the moment monetizing the videos uploaded to PeerTube requires more work, since it will not be enough to click on a button and start raising profits, although as the portal grows, the possibilities of monetization at the same time they will increase.