We all know very well that in 2015, the tech giant Apple was pressured by a group in favour of the control of firearms and decided to change its emoji of pistol by a version of toy. Yes, now according to the latest reports, the tech giant Microsoft finally ditches its pistol emoji and swaps it for a water gun, following in the footsteps of Google, Facebook and Apple.

In 2015, the tech giant Apple was pressured by a group in favour of the control of firearms and decided to change its emoji of pistol by a version of toy. Over time, this has had an effect on other companies.

Last year, the South Korean giant Samsung and Twitter changed their icons. Now the change comes also to the platforms of the tech giant Google, social network giant Facebook and the tech giant Microsoft as well.

In Android update this week, some users might notice the change in emoji: the Google version brings an orange water pistol. In turn, Apple, Samsung and Twitter have a green gun.

While the tech giant Microsoft used Twitter to show a preview of the new icon. “We are in the process of developing our emoji to reflect our values and the feedback we receive,” the company says.

By 2013, the tech giant Microsoft had already tried to create something different for emoji. For three years, the company used a kind of laser weapon. However, the choice was not matched by any major competitor.

We are in the process of evolving our emojis to reflect our values and the feedback we’ve received. Here’s a preview: pic.twitter.com/BlB3yYTSht

Moreover, the social network giant Facebook is also working on a change of its emoji but does not reveal more details.

Emoji standardization is done by the Unicode Consortium. However, the look of each icon is defined by each company. This opens up room for misunderstanding: for example, when a user sends toy gun emoji, the recipient may end up seeing a gun.

See the evolution of the weapon emojis:- 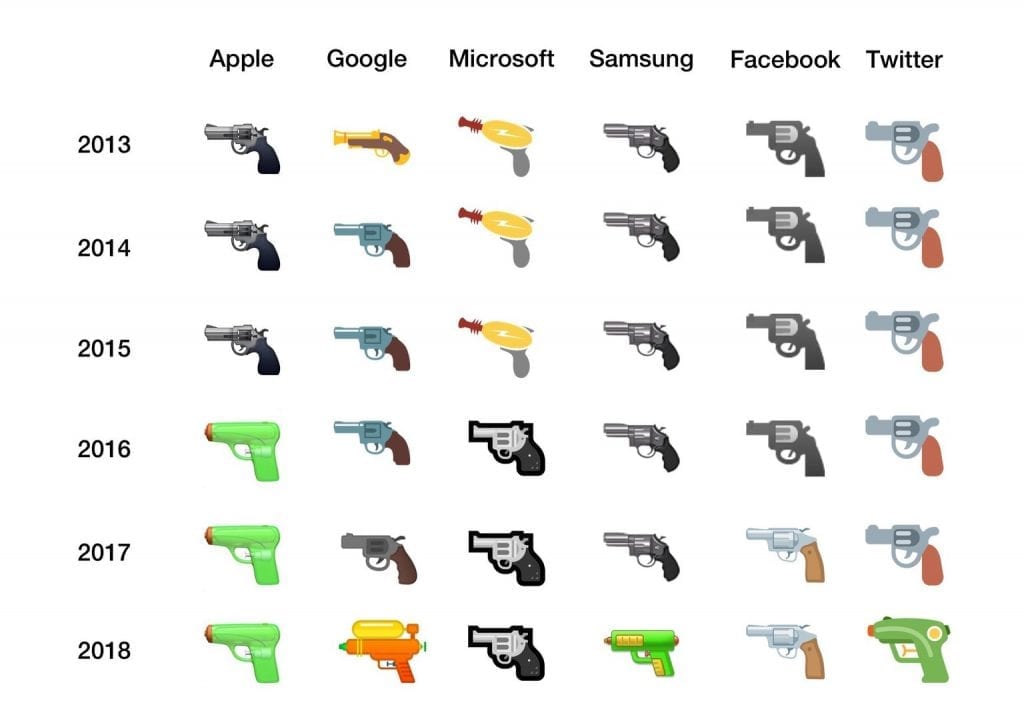 Why did Apple change the weapon emoji?

In 2015, a campaign called Disarm the iPhone pressured Apple to exclude emoji from its system. It was created by a group in favour of the control of firearms, which seeks restrictions for its sale in the US, such as criminal background check.

The request was not fully accepted. Instead, Apple decided to redesign the icon, which was considered by the group as a win. However, still, the gun control remains a central issue in the United States because of the recent shootings in the country.