If we talk about the Wikileaks, then we all know very well that Wikileaks is a non-profit whistleblower community whose website was hacked recently by the notorious hacking group OurMine. OurMine have ensured that what they do is to raise awareness of users and instruct on what to do to protect themselves online.

The members of OurMine have ensured that what they do is to raise awareness of users and instruct on what to do to protect themselves online, but their past gives them away, and attacks by yes to game servers like Minecraft or public service pages like WikiLeaks or Facebook, place them on the darker side of hacking.

It is not clear when this group was organized, but it is speculated with the possibility that they had left the collective Annonymous, something that would not be a surprise taking into account that the hacktivist group does not have a nucleus or dome that organizes it.

The first time we started talking about OurMine was in July 2015, when some media reported that they had launched a DDoS attack against several financial institutions, allegedly accessing their accounts and stealing $500,000 that “would distribute among the poor”.

In December of that same year, it was mentioned again by them for their Christmas attempt to realize a DDoS attack against the servants of Minecraft. It was not immediately clear what they achieved from their goal.

But a few days before OurMine made another operation, this time yes, had made them gain a bit of notoriety, but not for good. It was another DDoS attack, this time against WikiLeaks.

This made them win the rejection of the hacker community, especially the group Annonymous, who was just collaborating with WikiLeaks in an investigation into cyber espionage in the United States.

Some specialized blogs got in touch with members of Annonymous to ask them about the altercation, to which they replied that OurMine was just a “group trying to gain notoriety”.

Not that they were against it, but they let it fall that others were doing so using a more productive path: “Some are tearing down the Internet to defeat ISIS communications.”

Now, if we talk about the Wikileaks, then we all know very well that Wikileaks is a non-profit whistleblower non-profit organization that publishes secret information, news leaks, and classified media provided by anonymous sources whose website was hacked earlier today by a notorious hacking group well-known by the name “OurMine”.

“Hi, it’s OurMine (Security Group), don’t worry we are just testing your…. blablablab, oh wait, this is not a security test! Wikileaks, remember when you challenged us to hack you?

Anonymous, remember when you tried to dox us with fake information for attacking Wikileaks?

There we go! One group beat you all! #WikileaksHack lets get it trending on twitter!” 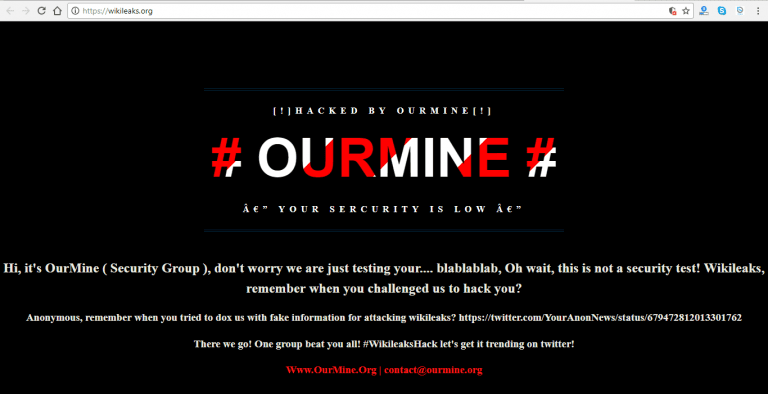 However, currently the hacked website is not reachable, most probably it is may be down for a fix. While on the other hand it is not yet known that how they managed to hack the website. Moreover, most of the security experts are speculating that this attack was done by attack vector DNS poisoning.

So, what do you think about this hack? Simply share your views and thoughts in the comment section below.

How to Save Web Pages as PDF on Android in 2022