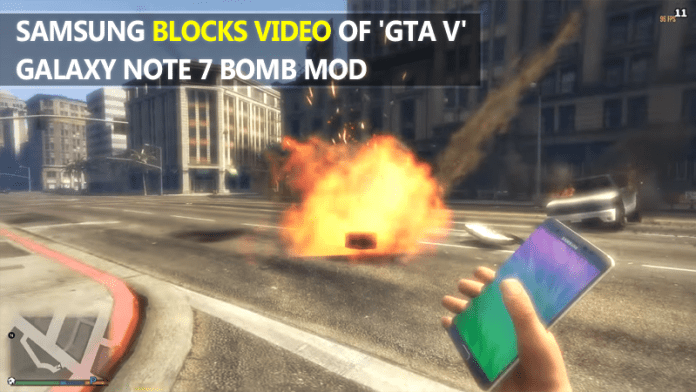 Samsung recently blocked the video of “GTA V” Galaxy Note 7 Bomb mod video. Samsung issued a DMCA takedown to remove the video about it on YouTube.

We have seen Samsung Galaxy Note 7 had some serious problem in the factory battery anode and cathode cell contact, resulting in overheating and can cause the battery to catch fire.

The Galaxy Note 7 had everything to be a sales success but turned out to be a torment for the South Korean company. After the first explosions were reported, the company then actually stopped selling this smartphone and started worldwide a replacement program.

Actually, the explosive Note 7 caused much trending news over the internet. Countless jokes are being made on Note 7 due to its explosive nature. To throw some spotlight on explosive Galaxy Note 7, one GTA V fan created a mod that swapped the game’s sticky explosives with a mode of the phone.

The video was going viral on YouTube and on Facebook too, GIF of the video was also started trending on Facebook for a while. However, Samsung didn’t find the mod funny at all. Techdirt reported, that Samsung had issued a DMCA takedown of the YouTube video showcasing the mod.

The mod was actually created by HitmanNiko, where he didn’t copy anything. However, Samsung used YouTube’s DMCA tool to file a bogus copyright claim. The video was pulled off from YouTube. It was still to be clear whether the uploader appealed Samsung’s request because other funny mods remain available for viewing on YouTube.

The video featuring the Galaxy Note 7 that was removed by YouTube is still available for viewing. You can watch the video below.