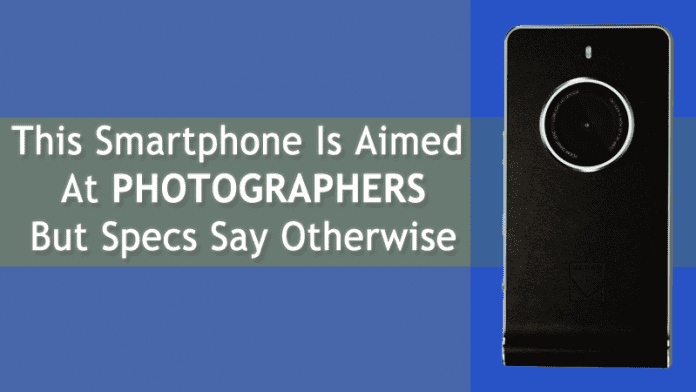 Did you all know that Kodak, the once powerful American photography company, is hoping for a recovery with the launch of Kodak Ektra, a smartphone named after its iconic 1940s rangefinder Ektra camera. Yes, Kodak is launching a photography smartphone.

This Smartphone Is Aimed At Photographers, But Specs Say Otherwise

It was in the year 2014 when it just began to appear the first rumors that the brand would bet on a range of mobile devices as well. The last years were quite turbulent and the company even had to sell its patents to endure in the market simply to avoid getting bankrupt.

Today, Kodak introduced the EKTRA, a smartphone which focuses on the photo although the specifications indicate oppositely. As the new device is known as EKTRA and is the new smartphone from kodak. Earlier the company has already launched the IM5 which did not receive much positive feedback.

Now the bet everything on EKTRA that comes with a slightly different design from what we are used to. Despite the focus is photography, the truth is that this smartphone brings a rear camera of 21 MP with Sony IMX230 sensor and a front camera of only 13 MP. It is a setting to many flagships.

In terms of the camera app, there is some news since there is an integration with Snapseed app as well as there’s also a “Super 8” video app that adds vintage-style filters to videos so you can bask in some sweet ’70s nostalgia, as revealed by the site Arstechnica.

The remaining device specifications follow what is normal for a mid-range smartphone. The SoC is which was used is the Mediatek Helio X20 64-bit, octa-core and GPU is a Mali-T880. It has 3GB of RAM and 32 GB of internal storage memory, with the possibility of expanding the memory space via a microSD card.

The battery is 3000mAh and comes with Android 6.0 Marshmallow. According to the information, this smartphone will cost around $545 and expected to come in the market around December this year.