We all know very well that all the high-end mobiles that we expected for this 2017 has already come out, and, now we can recap and choose our favourite ones without any problems. However, if you don’t have OnePlus 5T on your list then this news may change your mind, as a special edition of OnePlus 5T is coming soon.

All the high-end mobiles that we expected for this 2017 has already come out, and, now we can recap and choose our favourite ones without any problems, and, although you may not have the gold in your list, we know that the OnePlus 5T is at least one of the candidates.

If you are a fan of the Star Wars saga, maybe this smartphone will start uploading posts on your list since it’s only a matter of time before we can see the Star Wars special edition of the OnePlus 5T, that’s the first announcement of this device has been made by the Chinese smartphone manufacturer OnePlus.

Star Wars: Episode VIII – The last Jedi is very close to release, in fact, there are less than two weeks left for its release in theatres, on December 15 – you can already mark it on the calendar to go to the cinema.

The well-known Chinese smartphone manufacturer OnePlus knows this perfectly, and, as other brands have done in the past with great cinematographic titles, they are preparing a customized Star Wars style of their flagship device, of course, the OnePlus 5T. 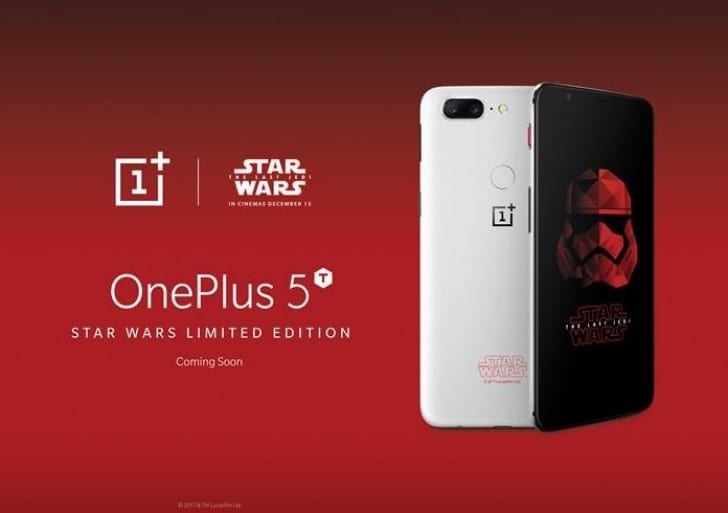 This has already been officially announced, and as you can see in the image, this special edition has many changes from the usual, and very good looking. To begin with, we see how the chosen colour looks like a very nice matte white that reminds us a lot of what the OnePlus One had, and that, evidently, would be inspired by the helmet of a Stormtrooper.

In its back the device would have an engraving with the name of the saga of movies that we like so much, and the fact that the image appears as a wallpaper, makes us think that the terminal could have some customization at the level of software, such as the wallpaper itself, or a custom interface in black and white colors. There is a whole world of possibilities.

For the time being, we will have to wait -possibly- until December 15 for the well-known Chinese smartphone manufacturer, OnePlus to announce the device, of course, I am talking about the flagship killer device, OnePlus 5T and put it on sale officially.