We all know very well that a smartphone is currently used as a camera by amateurs as well as by professionals. But, whoever accompanies the universe of smartphones is aware of the quality of Google Pixel cameras and the very quality of the app developed by the tech giant Google to capture images, Google Camera.

A smartphone is currently used as a camera by amateurs as well as by professionals. It is obvious that the results are far from a professional machine, but with the current top of the range are already achieving absolutely incredible results.

Whoever accompanies the universe of smartphones is aware of the quality of Google Pixel cameras and the very quality of the app developed by the tech giant Google to capture images. RAW capture and HDR+ mode can now be tested on this app and on some Qualcomm processor-based smartphones.

Google Pixel is one of the most highly rated smartphones in terms of photo quality, to which the dedicated application also contributes a lot.

The Google camera and its new options for your Android

If Google Camera is only available for its fullness to the Google Pixel, a Ukrainian programmer, known as BSG, has been working on it to be able to bring these features to more devices.

The Google Camera app that is coming up with new options is a modified app whose results are surprising to users, with features that are becoming increasingly common in the world of smartphones, enjoying the better sensors.

Approximately two months ago an APK had already appeared for several models with Qualcomm processor, namely for the Snapdragon 820, Snapdragon 821 and Snapdragon 835, with the functions HDR+ and Selfie Flash. Now here’s the update, still available for a very short list of devices. 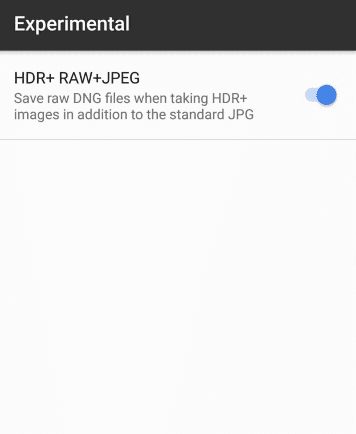 The main highlight of this update is the capture of photos in RAW format, which presents itself as an advantage mainly for those who work with photography since it is recorded with your original quality without being processed by the smartphone. Even so, this app continues to record in .JPG format.

The HDR+ option already existed in the previous version, however, it appears to have received significant improvements. This mode will allow manual configuration of a series of parameters associated with the HDR.