The most popular instant messaging app WhatsApp is working on a new feature called “Read Later“. This feature is an improved version of the Archived chats feature which is available at present. The ‘Read Later’ feature is seen on the new beta updates with few changes.

Contents show
Archived Chats Feature is Replaced by ‘Read Later’ Feature
How does Read Later Feature will Work on WhatsApp? 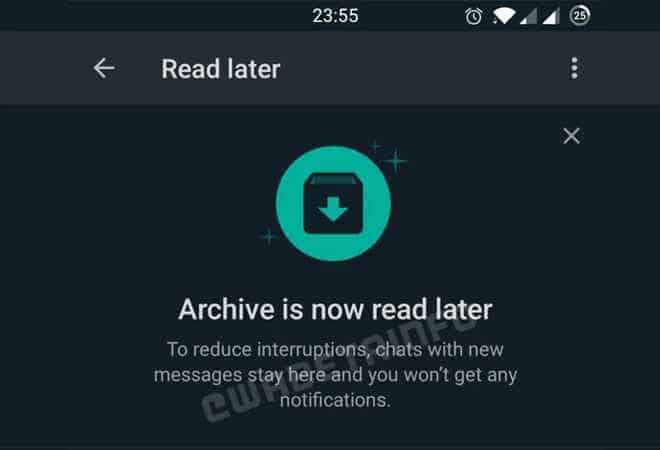 At present, the feature is available for beta testers and soon it will be coming for beta updates. According to WABetainfo, the feature is under development. And it is said that the functionality of the new feature is just like Archive chats, the user can also disable it if they don’t want to use it.

As per the reports by WABetainfo,

“WhatsApp was developing Read Later, a replacement/improvement of Archived Chats. When a chat is added in your archive, the user doesn’t receive notifications from it because all archived chats will be automatically muted, in order to reduce interruptions”.

How does Read Later Feature will Work on WhatsApp?

For quite some time now, Whatsapp is working on the new “Read Later” feature. Once the new feature is rolled out officially, the users will not get notifications from the contacts to whom they have added to the “Read Later” section.

“Archive is now Read Later—To reduce interruptions, Chats with new messages stay here and you won’t get any notifications.”

However, if you don’t want to add any contact in the Read Later section then you can change the settings. By bringing this new feature, Whatsapp wants to reduce interruptions as all the new messages will be there under Read Later section and the users will not get any notifications also. In short, we can say, all the chats in this category are muted. The feature is expected to roll out soon.

Apart from the Read Later feature, the company is also developing a few other features like Linked Devices or multi-device features.