Recently, a new version of “Your Windows has been banned” ransomware is actually reported by the well-known The Merkel media site and not only that even the site also claims that all the computer and as well as infected users must note that it is a scam.

Your Windows is Banned: This New Ransomware Scam Is Demanding $50 In Bitcoin

“Your Windows has been banned” is a ransomware infection, which was earlier released by the tech giant Microsoft security experts on back to late 2016. Basically, this ransomware has been detected to block the screen of victims as it simply infects and pretend to encrypt all the files on the infected computer.

The infection has been reported to show a “blue screen of death” message type to victims and scares them to pay the sum of $50 in Bitcoin simply to unlock the screen and rescue their files and data present on the infected computer. The “Your Windows has been banned” ransomware infection is lock screen type and is not a very dangerous threat.

However, this new version of “Your Windows has been banned” ransomware pop up shows 2 options to all its victims, and here they are mentioned below:-

2. Delete all your data and make your computer unusable

Yes, now many of you might be thinking that the second message simply looks like a fraudulent command which is much enough to make everything clear. Apart from all these things, here comes the payment part, this “Your Windows has been banned” ransomware simply ask all its victims to pay $50 ransom in Bitcoin simply by visiting a particular fraudulent URL. 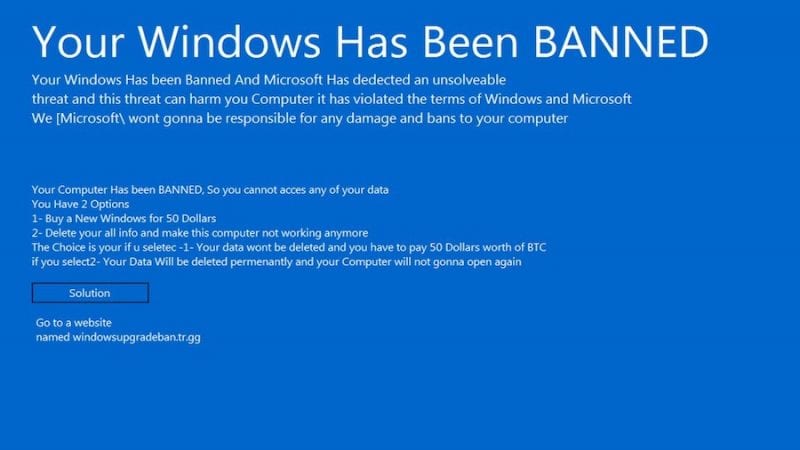 But, the most important thing is that in such cases or situations, it is strongly recommended to conduct a total malware scan using an anti-virus tool and then simply contact the official customer support simply to seek further help.