Although today is a full display trend, the Chinese smartphone manufacturer Xiaomi’s Mi Mix was responsible for successfully implementing the 18:9 screens in the market.

After we get to know the second version last year, now comes a few more rumours of the new version that will be presented this year.

While not the first to test this technology, the truth is that the Chinese smartphone manufacturer Xiaomi’s Mi Mix was the first to successfully deploy the large 18:9 screen. Following this launch in November 2016, it marked the deep lines of future smartphones, with several major brands following the trend.

After launching the second version in 2017, the Chinese smartphone manufacturer Xiaomi continues to evolve this range and soon it may launch the new Xiaomi Mi Mix 2S that will bring some interesting news, especially regarding the performance.

According to an image that came up recently, with an alleged result of an Antutu test of the new Xiaomi device, you can see that it brings a Qualcomm Snapdragon 845 processor, as expected. However, being this smartphone awaited at the MWC 2019 in Barcelona, the question remains on the air if the Chinese smartphone manufacturer Xiaomi is not trying to compete with the South Korean giant Samsung for the first place with this SoC.

As far as we know, the South Korean giant Samsung will also present its Galaxy S9 and S9+ in this event, with one or more versions to be equipped with the new Soc from Qualcomm. This information always leaves some doubt in the air, since the South Korean giant Samsung usually reserved for itself the first units of this SoC, trying always to be the first to present this novelty. 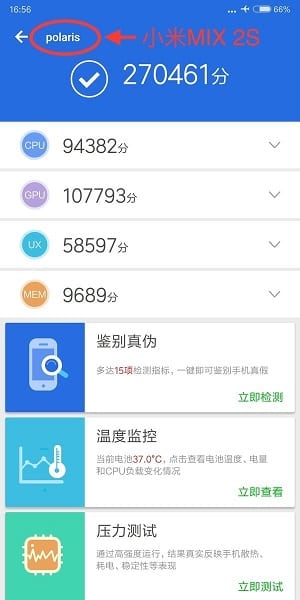 However, if the print is confirmed, we can see an amazing result. According to the image, the Xiaomi Mi Mix 2S scored 270,461 in Antutu, which significantly exceeds the values of Snapdragon 845.

But we must keep in mind a detail. For this test the new version of Antutu was used, which represented a change in the tests and that increased in a generalized way the results. For comparison, a OnePlus 5T with Snapdragon 835, totals 210 006. However, now if you want to test this new version, update the application in the Play Store.

These and other news should be presented during the MWC 2019 in Barcelona, where several brands are already preparing to bring us a lot of news.