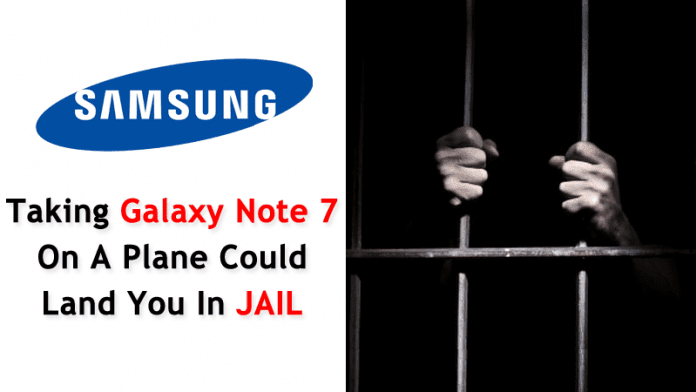 Did you all know that taking Galaxy Note 7 on a plane could land you in jail? Hence, last week, Samsung has discontinued the production of the Galaxy Note 7, recommended that all users to disassociate the smartphone immediately and announced another recall program, offering $100 to anyone who exchanges Galaxy Note 7 with other Samsung device.

It was a recommendation, as it turned a determination: since last Saturday (15), it is forbidden to bring a Samsung Galaxy Note 7 in an airplane in the United States, regardless of whether the unit is turned off or not. But the rule goes further: the Federal Aviation Administration (FAA) issued a prohibition order and possession of smartphone of explosive Samsung aircraft turned federal crime.

The order of the FAA, published by The Verge, determines that it is forbidden to transport or offer to transport a Galaxy Note 7 on the plane, whether it is in your hand luggage, in checked baggage or cargo. Whoever does this will be subject to a fine of up to US $179,933 per day of violation and could be sentenced up to 10 years in prison.

People who “inadvertently bring” a Galaxy Note 7 inside the aircraft may not use or carry the smartphone and should make sure that the device does not accidentally call (due to alarms, for example). In addition, the device must be kept in the passenger’s pocket throughout the flight, not in the luggage compartment or in the front seat pocket.

According to the FAA, the restriction applies to all Galaxy Note 7, substituted or not, is necessary because “only a fire incident is a high risk of death, serious illness, severe personal injury and damage to property and the environment.” The risk is increased when the fire “occurs on board an aircraft during flight.”

On 5th October, a Galaxy Note 7 replaced by Samsung’s recall program caught fire inside a plane of Southwest Airlines in the United States, before takeoff. The owner said he had turned off the device, as requested by the crew, but the device began to heat and smoke. The flight was cancelled, the passengers came out in safety, and no one was injured.

Hence, last week, Samsung has discontinued the production of the Galaxy Note 7, recommended that all users disassociate the smartphone immediately and announced another recall program, offering $ 100 to anyone who exchange Galaxy Note 7 with other Samsung device. The kit to return the smartphone includes gloves and even a box with thermal insulation.