As we all know very well that after the end of tomorrow afternoon, the Cupertino giant Apple will reveal its new personal computers Line-Ups. As the tech giant, Apple has already rumoured and written much about its new Mac Line-Ups. But, now Apple accidently leaked images Of new MacBook Pro.

After the end of tomorrow afternoon, the tech giant Apple will reveal its new personal computers Line-Ups. As the tech giant, Apple has already rumored and written much about its new Mac Line-Ups along with the improvements that Apple promises to bring.

But before this event, few leaked images of the new MacBook Pro are already circulating on the internet as well as many of the rumours were also confirmed.

The images that recently emerge are assumed that they are real and not just renderings that were created based on what that it already knows. As the images are showing few inside OS interfaces which were found inside the MacOS Sierra update only that Apple released recently. 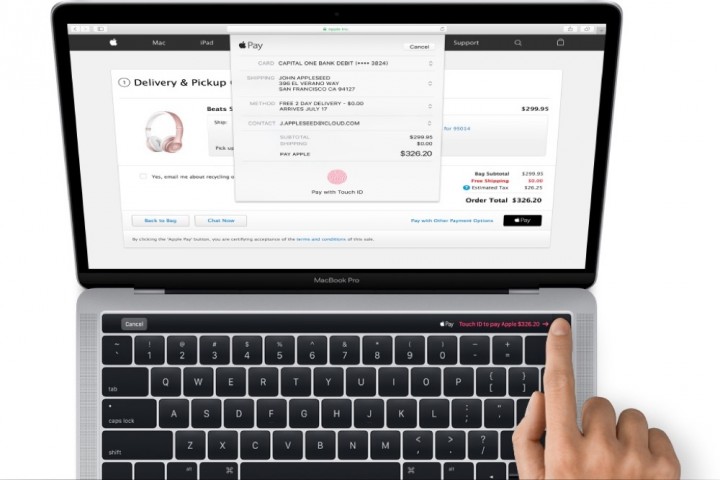 However, the laptop’s most impressive feature is the little OLED touchscreen band that takes the place of the function keys. The leaked picture shows the small touchscreen band in action which is being actually used for Apple Pay. So, if we speak about the new lines of the MacBook Pro, the new MacBook will come with a fingerprint reader, which will be in the upper right corner.

In addition to these new features, you can also see that the screen and the keyboard itself frames are smaller, thus achieving a space gain. However, we can not see these images properly from all the sides as the images are not properly visible from all the angle. Hence, we can not even guess whether this new MacBook Pro is thinner or not as it is expected.

Finally, you can see that this new model will go on to have the speakers next to the keyboard in a more accessible area with better sound quality.

In addition to this new model which is shown in the image simply make us remember about the 13-inch version which is also expected that the tech giant Apple will introduce a new MacBook Air with the same dimension.