Recently, a small Chinese smartphone company has decided to “admire” the tech giant Apple and more specifically its flagship model, iPhone X with its latest device, the Leagoo S9, a clone of iPhone X that runs Android operating system and cost less than $300.

Oscar Wilde said that “imitation is the most sincere form of admiration,” and if not they tell Leagoo, a small Chinese smartphone company that has decided to “admire” the tech giant Apple and more specifically its iPhone X with its latest device, the Leagoo S9, an iPhone design with Android heart at less than $300.

It is true that we are in a sector and an industry in which there are ideas that are ‘borrowed’, that inspire or serve as a starting point for the rest. The tech giant Apple set a standard in terms of screen and usability with its iPhone in 2007.

The South Korean giant Samsung dared with the curved designs and put the Infinity Display concept that now continues to the new Honor. But it is one thing to borrow an item or let yourself to be guided by a trend, and another is to clone it in the most blatant way possible.

The clone of the iPhone X with Android

Of course, in Leagoo there are fans of the tech giant Apple because their Leagoo S9 is that: an absolute clone of the iPhone X in all its aluminium and crystal design. At the front, we see the screen without frames that the tech giant Apple mounted in its top of the current range, and even the characteristic of upper flange traced to the millimetre with the absence of a physical Home button given the design of the screen, of 5.85-inches AMOLED. If we turn it around, we can see that this Android phone has a double camera with the lenses placed vertically.

Of course, to the delight of the critics of the Face ID, this iPhone X clone has something that they will love: a fingerprint reader placed just in the back to avoid breaking the design of the screen without frames. Inside we can find a MediaTek P40 processor -one of the rivals of the Snapdragon 670, the Qualcomm chipset for the mid-range, 6GB of RAM, and 128 GB of internal storage. The Dual rear camera mounts twin lenses of 16 Megapixels, and of course, the operating system is Android, which ends up finishing the set.

Subject to changes, these characteristics are not definitive since the terminal “is still in production”. In fact, nothing else is known, although Leagoo has had time to distribute the photos with a good resolution of its S9 for creating expectation. And make it clear that its terminal will cost a fraction of what an iPhone X is worth, noting Leagoo that the S9 will have a price “less than $300.” 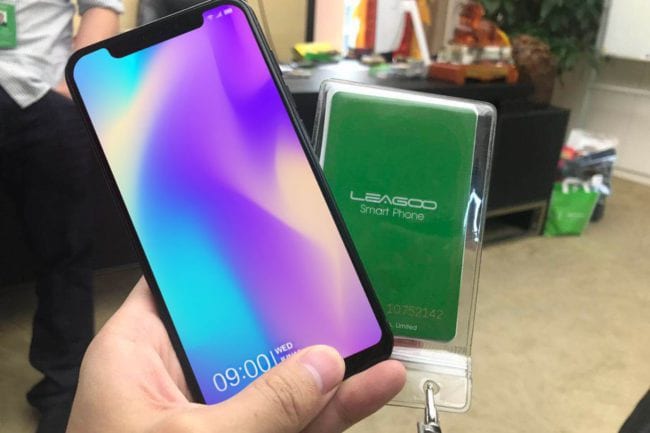 But the most curious and funny detail lies in the design choice itself, since taking into account that the previous mobile, the Leagoo S8 was basically a clone of the Samsung Galaxy S8, and this new have been called S9, why not wait and copy the look of the Galaxy S9 once it is presented at the beginning of 2019? Because apparently, giving a more rounded Samsung Galaxy type to the S9 was going to cost the brand more expensive, so they decided to opt for the look of the iPhone X, which apparently comes out cheaper.

An iPhone X with a fingerprint reader and Android operating system at less than $300, without a doubt something you do not see every day. What will be the next model victim of the ‘admiration’ of Leagoo? Simply share all your views and thoughts in the comment section below.