Yes, it’s not a joke as it’s now possible with Airbar, the advanced technology that converts your hand actions to computer commands, and using this, a laptop can be converted into a touchscreen,

Recently this technology is released worldwide, which is a revolutionary change in technology. Airbar is a type of rectangular stick that gets embed to the bottom of the screen and senses your hand actions on the screen and,

Then does the working by commanding the PC using a wire connected to the PC’s USB port. So have a look at the complete discussion below.

Also Read: How To Kick Off Other Devices From Your Wifi In Windows PC

The only thing you will need is the Airbar that will be converting your laptop into a touchscreen. And the things you should know about this tech tool are listed below, so look at it.

Working Of the Airbag

AirBar projects an invisible light field all over your screen. When your finger, pen, or brush breaks the light, you interact with the screen without actually touching it. And this light senses the hand actions and then transmits via the cable directly connected to the laptop’s USB port.

This tool was coming up in January 2016, and you can pre-order it if you want to get it. Its availability will also be limited as with limited stock, so start ordering now to get it. 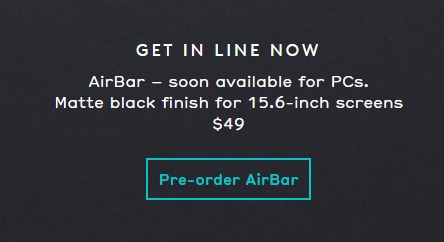