Recently, Netflix announced the possibility of seeing their content in offline mode that many users seek ways to achieve record or save them on SD cards.

Contents show
Now You Can Download Netflix Movies And Shows To Your SD Card
So, How To Activate This New Feature?

Also Read: How to Use Netflix Offline Viewing (Download Netflix)

The largest video streaming service on the Internet has been actively improving its mobile applications to make them increasingly complete and optimized.

One of the latest news is that movies and series can be now downloaded and viewed without an Internet connection. To further improve, Netflix will now allow its Android users simply to download any movies and shows to their SD card.

Since Netflix announced the possibility of seeing their content in offline mode that many users seek ways to achieve record them on memory cards, thereby freeing useful and essential space in smartphones. At the time, Netflix did not contemplate this possibility, but the requests were many and ended up creating it. 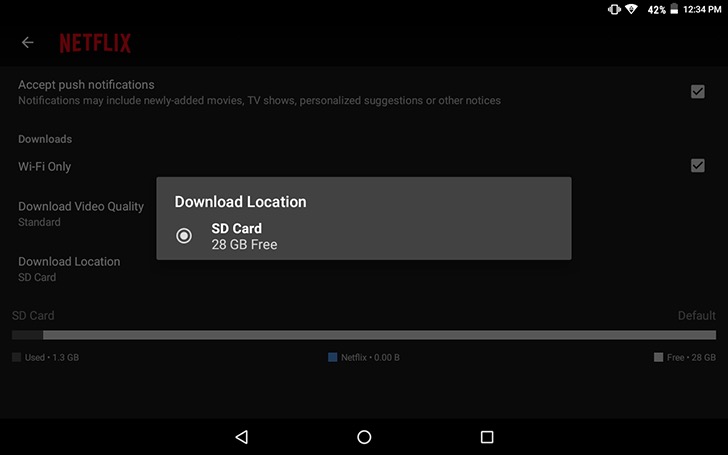 So, How To Activate This New Feature?

To activate this new feature simply, you have to install the latest version of Netflix for Android, and then in the settings, you have to change the location of downloads to the SD card. From that moment the new content will be stored in the new location.

It is not yet known if the news will soon be extended to Windows 10 Mobile or not. The iPhone, for obvious reasons, will not have this ability to write card content.

Android​ Users – You can now download to your SD card so there's always room for more. pic.twitter.com/Uqt2GSjPw5

Netflix itself made the announcement through its Twitter account, where it shared a video that shows how to activate the new option.

It is an expected and often requested novelty, which complements the much-appreciated possibility of watching movies or series without having an active Internet connection. So, if you want to download the latest version of the Netflix application on your Android device then simply click here to download.