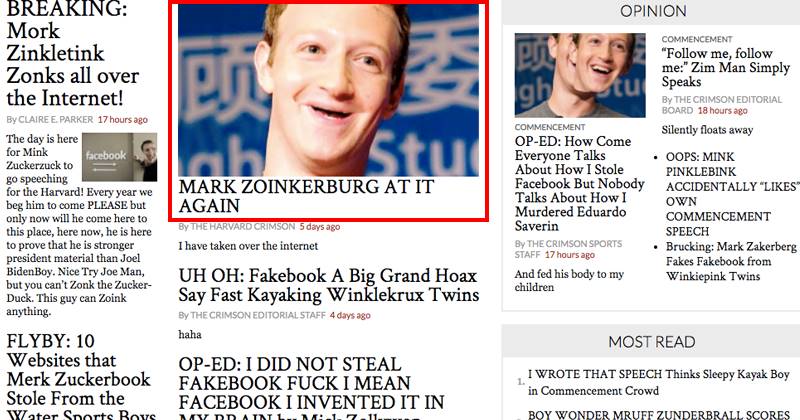 We all know that it’s been 12 years since Mark Zuckerberg left Harvard University to become the CEO of Facebook.

However, recently, hacker trolls Mark Zuckerberg at Harvard in the ugliest way possible.

It’s been 12 years since Mark Zuckerberg left Harvard University to become the CEO of Facebook. This May 25, Zuckerberg has returned to his faculty to receive an honorary degree and give a graduation speech.

The arrival of the creator of the social network to Harvard has caused a great stir, although other people have had a different idea to welcome Zuckerberg. Hours before his speech, a hacker edited the front page of the Harvard Crimson student newspaper to tease the CEO.

The website of The Harvard Crimson has been reinstated, although the hacked version of the newspaper was available long enough for them to be able to take screenshots. Derek Choi, the president of the student newspaper, told The Verge that “The Harvard Crimson website was altered by an unauthorized user” and lamented the potential consequences of hacking for users.

Mark Zuckerberg left Harvard in 2005 without finalizing its studies by focusing of plenary in its social network, Facebook. During his university visit, the CEO has shared a video on Facebook Live in his old room, where he created what has become a social network with more users in the world.