We all know that Elon Musk is much admired in the world of Science and Technology because of his innovative ideas that always aim to make the planet Earth a better place. However, recently, Elon Musk’s Hyperloop hits new mind blowing speed record.

Contents show
Elon Musk’s Hyperloop Hits New Speed Record
Understand the concept of Hyperloop
But how does everything work?
A Speed Record

Elon Musk is much admired in the world of Science and Technology because of his innovative ideas that always aim to make the planet Earth a better place. In fact, we can say that Elon Musk “is in all” starting in the Tesla autonomous cars and ending in SpaceX, a company of Space Exploration.

Recently, Elon Musk has once again shown that his ideas are to move forward and that he intends to make an impact on everyone’s life. His super-fast transport project (Hyperloop) proved to be consistent and made further progress.

Understand the concept of Hyperloop

It was at an event in Santa Monica, California where Elon Musk mentioned for the first time that he was thinking of creating another means of transportation. Not only would it be something completely different from everything we had seen so far, but it would also have five fundamental characteristics: its operation would not be affected by weather conditions, it would be free of collisions, could reach twice the speed of an airplane, would be efficient in terms of energy consumption and, finally, it would be able to self-sustain.

Of course, many of these characteristics remind us of the trains we currently have access to. However, what the trains of today offer us nothing compares with that which is the vision of Musk. The name of the project is Hyperloop because Elon Musk wants the more advanced models to achieve hypersonic speeds. Yes, you got it! A speed well above supersonic speed.

The sound propagates in the air at a speed of approximately equal to 343 m/s, or 1225 km/h. The supersonic plane, Concorde, is able to pass the sound barrier and thus make London – New York in three and a half hours. But Elon Musk wants Hyperloop to be even faster, that is, to move at a speed over 6174 km/h. (Hystonic Speed 6174 km/h – 12348 Km/h).

Between 2012 and 2013, a group of engineers from both Tesla and SpaceX teamed up and began working on a conceptual model of Hyperloop to try to make reality what was just an idea. In addition, Musk decided to invite people to participate. So Hyperloop Alpha was released with an open source design. 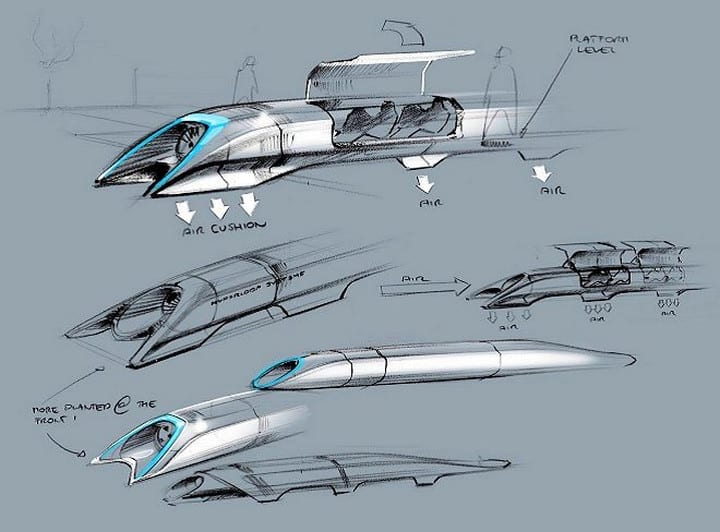 Each year, SpaceX supports a competition called Hyperloop Pod Competition, which aims to promote the development of new ideas and concepts around Hyperloop in order to enrich the project.

But how does everything work?

Hyperloop is a system that involves building a large underground or surface-mounted pipe whose interior environment contains special features. 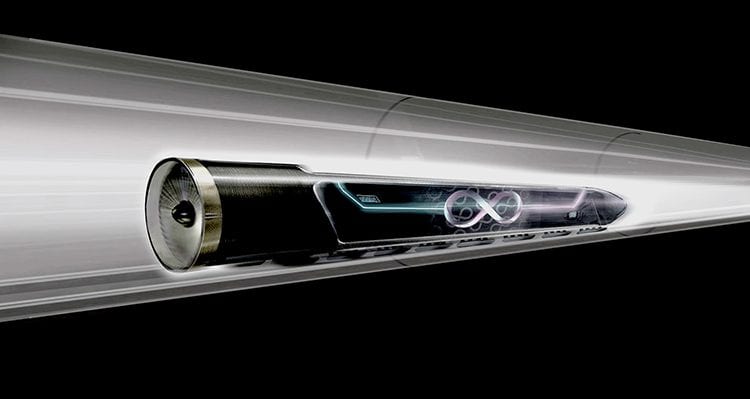 The capsule where the passengers travel does not move due to the pressure of the air inside them as in vacuum tubes. Instead, Musk intends to use electromagnetic motors to achieve speeds never before seen. In fact, the interior of the tubes has a certain level of vacuum but they are not completely free of air. The air circulating inside it has a low pressure.

Thus, everything that moves inside the tubes ends up compressing the air that is in front of it, which provides a kind of cushion that helps to slow down the vehicle. Because of this, Hyperloop will have a special fan whose function is to redirect air to the back of the capsule. However, during this process, much of the air passes through compressed air carriers which help to relieve friction between the passenger carrying cap and the surface.

The way the vehicle is driven is designed to withstand adverse weather conditions and earthquakes. The pillars coming from the ground and supporting the structure can shake because there is no continuous section through which the capsule moves. In addition, Musk intends to place solar panels over the tubes to provide power to the electromagnetic motors.

A few days ago, Tesla hit a new speed record with its own Pod. Elon Musk’s team managed to reach 354 km/h. Still, days before this event a WARR student team had reached the 323 km/h mark during the Hyperloop Pod Competition.

With all the innovation in the Hyperloop project, Elon Musk wants his idea to become the safest, fastest and most convenient means of transportation in the world. However, the bar is very high. China plans to build a “flying train” that will be up to 4 times faster than a commercial airliner. Apparently, Musk is not the only one who likes high speeds.