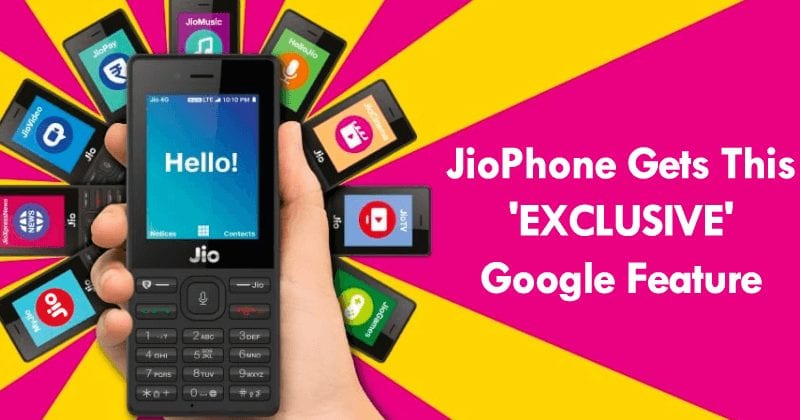 We all know very well about Reliance Jio, the telecom company had already offered high-speed internet for free and had previously dominated the telecom section in India by providing unlimited free calls along with SMS. Now, the 4G feature phone of Reliance Jio telecom, JioPhone just got an extraordinary new and exclusive Google Feature.

Reliance Jio, the telecom company had already offered high-speed internet for free and had previously dominated the telecom section in India by providing unlimited free calls along with SMS.

If this now enough, then let me tell that recently Reliance Jio also announced that it is giving 100% cash back to its prime customers on recharges of Rs.399. The new offer is a part of the promotion in the upcoming festive season of Diwali.

We all know, the telecom operator Reliance Jio is about to dominate the smartphone section by launching the cheapest 4G handset on the Indian market. Reliance Jio had already unveiled its much-talked 4G VoLTE feature phone in India back in July 2017.

As recently, in a statement, a Jio spokesperson stated that “Jio Phone, ‘India ka smartphone’ is committed to fulfilling the country’s digital vision. Jio welcomes the initial 6 million Indians who are moving to digital life with the Jio Phone and will soon announce the next Jio Phone booking date”.

Not only that even a company insider told FactorDaily that “There are not enough apps compatible with KaiOS but people are working on developing special versions for the Jio Phone”.

Now according to the latest reports, the tech giant Google and the well-known storm maker Reliance Jio revealed that a special version of Google Assistant which is specially built for Jio Phone and not only that even it will simply offer support for both the languages Hindi and English.

In an official post, the storm maker company, of course, the Reliance Jio added that “This will help bring the benefits of the Google Assistant to millions of first-time internet users on the JioPhone with an intuitive voice-based user interface, along with a rich set of data services.”

However, if you don’t know the specs of JioPhone then let me again introduce the specs of Jio Phone, as it comes with a 2.4-inch QVGA TFT display and this JioPhone basically runs on KAI OS which is actually a modified version of Firefox OS. This 4G feature phone, of course, the Jio Phone is powered by a dual-core processor which is coupled with 512MB RAM and it offers 4GB of internal storage along with the external storage feature which is expandable up to 128GB via microSD card.

So, what do you think about the new Google Assistant for Jio Phone? Simply share all your views and thoughts in the comment section below.