There’s no doubt about that Linux is a compelling alternative to Microsoft Windows, but still, it doesn’t mean that the tech giant Microsoft’s Windows is anywhere close to losing the number one desktop in the desktop segment.

Linux Who? Windows Still King Of The Desktop

In the market for Desktop operating systems, the choices are not many. Windows, GNU/Linux, and MacOS are the main ones but among these, Windows leads with a super advantage over its “rival” Apple’s MacOS.

Get the latest NetMarketShare data on the desktop operating system market which will show you the exact result. However, in many occasions, we had already informed, that the tech giant Microsoft’s Windows dominates the Desktop world.

However, this is not an ordinary domain because the advantage for GNU/Linux and MacOS is a lot. According to data from NetMarketShare, Windows leads the desktop market with 91.59%. MacOS only has a share of 6.57% and Linux 2.14%. 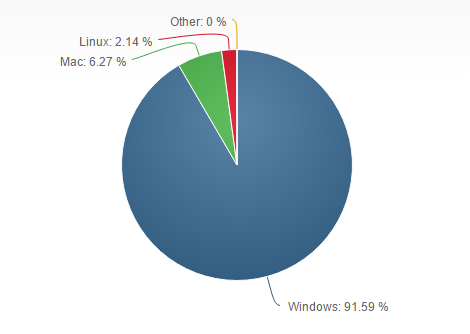 The numbers, now released, speak for themselves and there is no doubt that Microsoft’s Windows dominates and is not losing strength in this segment. In the mobile segment the story is different because, increasingly, Windows has a presence almost irrelevant in the market of operating systems.

So, what do you think about Windows? Simply share your views and thoughts in the comment section below.