Nokia recently made a major comeback in the smartphone market and it looks like Nokia is doing things really well. However, now according to the latest reports, the Finnish company Nokia will soon launch a new version of Nokia 6.

Meet The New Version Of Nokia 6!

We all know that Nokia recently made a major comeback in the smartphone market and it looks like Nokia is doing things really well.

The manufacturer has resurfaced as a phoenix with the help of HMD Global and had now entered the Android market. The next smartphone that could be expected from the HMD global is Nokia 9 and it’s going to be the first high-end smartphone from the Finnish company Nokia that can compete against the all new Samsung Galaxy S8, Note 8 and iPhone X.

After releasing all their models, now the brands are preparing their new catalogues and looking to the next year that will be here in just 3 weeks. Among them the Finnish company Nokia, which after testing the Android operating system has been dumped with this and last the first phones that will be on sale in 2019, including a Nokia 6 that has already passed the TENNA.

Once it was the king, and the market was practically dominated by it. But the Finnish company Nokia at the end of the last century and the beginning of this had to face a market change, the birth of the smartphone and the fight between two operating systems, Android and iOS, which quickly displaced the legendary Symbian OS which was born 20 years ago. In 2017 we saw the Finnish brand Nokia resurface with the help of HMD Global, and now the new Nokia run on Android and mount large touch screens.

Right in the middle of summer, here at TechViral we were analyzing the Nokia 6, a mobile designed for the mid-range that mounted a Snapdragon 430 processor with 8 cores, with 3 or 4GB of RAM according to the model chosen and screen of 5.5-inches. 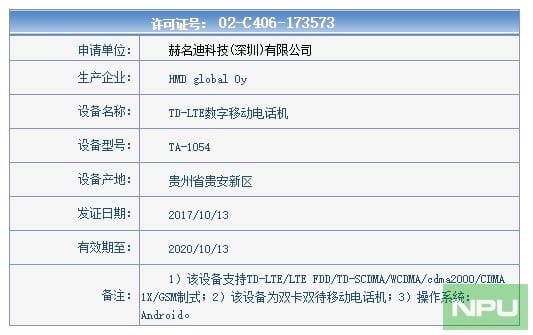 With a nice design but improved performance, the Nokia 6 has faced a hugely competitive market as is the mid-range. A market that next year will be equal or more competitive, which is why the Finnish company is already preparing a new catalogue for 2019, including a new Nokia 9 and a new Nokia 6 2019, which appeared after a recent leak with origin in China.

Among both smartphones, the Nokia 6 2019, known as model TA-1054, has been the first to pass the certification of the TENNA, the Chinese certification centre. And although it is known that it is the new Nokia 6, at the moment the record does not add any data on the specifications or the appearance of the terminal, only that it will come with Dual SIM. But we can compose a list of its (possible) features based on the latest leaks that have been emerging, as it will look similar to Nokia 7, with smaller frames and no physical front button will be there.

It may feature a 5.5-inch screen, with a ratio 18:9 which is becoming the current standard. Internally it will be more powerful with a Snapdragon 630 processor, 4GB of RAM and 64GB of internal storage space. Having no central physical button, the navigation buttons will be tactile, the fingerprint sensor will move back along with a possible Dual rear camera. And the Bothie function for the selfies will be maintained.

The question is, how many of these leak data are true and how many are not? It’s time to wait, but given that we already have one of the new Nokia registered in the TENNA, to see its appearance simply we have to wait.

So, what do you think about this Nokia 6 (2019) variant? Simply share all your views and thoughts in the comment section below.