Microsoft Edge has passed Apple’s Safari web browser in terms of the user’s number, and it has become the world’s second most popular desktop browser.

In the past, Microsoft has always struggled to gain users to their web browsers. However, they have already installed it in your new Windows, even Windows Operating System user capitalization around 74.83%. Still, users saw it as worthless.

But, now, according to web analytics data featured from StatCounter, Microsoft Edge has gained a lot of desktop users in the past some months. 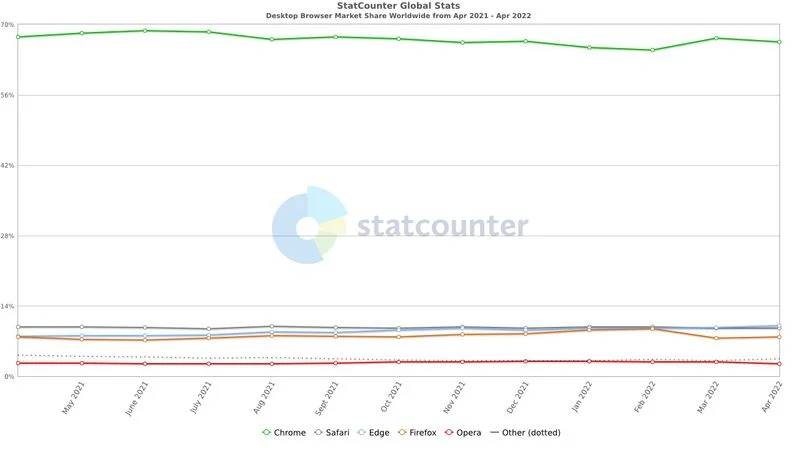 StatCounter’s data shows that Microsoft Edge owns a 10.07% share of the desktop browser market worldwide till April 2022. In contrast, Apple’s Safari browser has 9.61% of desktop browser users, which means Edge is around 0.46 percent ahead of Safari.

Besides, Google Chrome has the largest browser market share of a 66.64%, that’s why it is the world’s first popular browser. We all know how speedily Chrome has gotten this far with its simple interface, google-extensions, and useful apps plugin. Still, we don’t notice how Edge did it.

The main reason behind Edge surpassing Safari was Microsoft’s action to launch its replacement version in January 2020.

This new Edge rebuild version was based on Chromium, where the exact basis of Google Chrome is implemented. It includes features like an easy password manager, support for chrome extension, etc.

That action has delivered excellent output as Microsoft’s Edge is now the second-most popular desktop browser worldwide. Also, it rebrands with Windows 11 launch, impacting users’ use of it. To many Windows 11 users, it feels like the same as Google Chrome.

Microsoft is also planning some new features for Edge to grow this figure. As recently, Microsoft revealed a new built-in VPN-like service for Edge, new integrations that will help users to diagnose any performance issues, and some other modifications to the password manager.