Users targeted in the Windows 10 Insider program can test Story Remix, the tech giant Microsoft’s update to their Windows 10 photo application, which will come along with the new operating system update.

Brandon LeBlanc, one of the leaders of the Insider program, communicated the news in his Twitter profile. Microsoft is testing new names for its photo application. However, as Microsoft Insider details, the new name that has taken the application in the last update is Story Remix.

We are actually testing a few different name choices for the Photos app with #WindowsInsiders. Naming is not yet final 🤠Give us feedback! https://t.co/xVLbLN3L9F

In fact, everything seems to indicate that developers are preparing important improvements to this app, so that not only it is useful for viewing photos, but will also allow you to collect both videos and photos and create audiovisual material in a simple but personalized way.

These collections will essentially be stories that will follow a common pattern detected by the artificial intelligence of Windows 10 so that their users receive suggestions about these creations and can create and share them.

In addition, the trial versions that have been tested also allow editing, adding music and additionally add 3D effects to videos, a function designed to be available in the medium term within the updates. 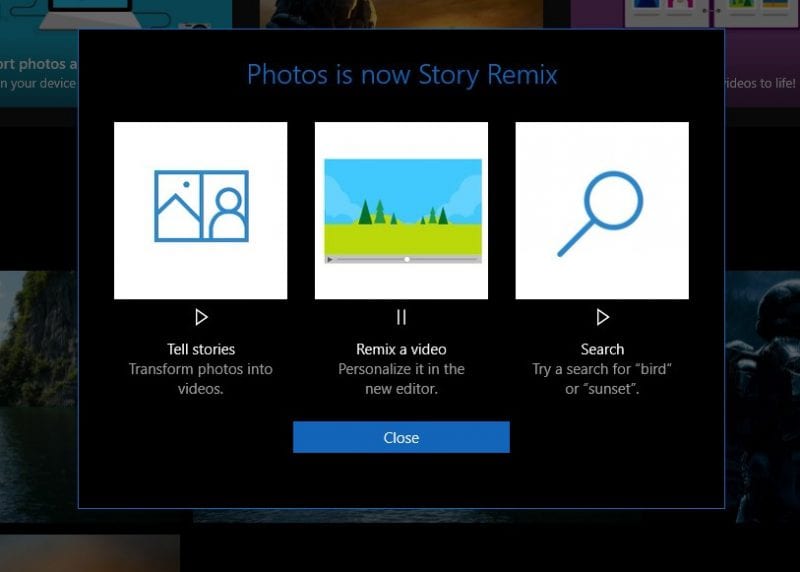 From what can be seen in the images, the new approach would be directed to the Collections, through which stories could be created with the archives contained in the galleries. I am sure that Microsoft has the tools to carry out this proposal, but, surely it wants to go further.

A few days ago, we reported about the plans of the Redmond to use artificial intelligence in this type of applications, in order to automate tasks such as the identification of objects and people. In addition, searches would be simpler and, perhaps, through patterns and labels.

Windows Insider is a pre-test program for the Windows operating system, developed by the tech giant Microsoft, where the developer’s bets are usually overturned and then come to the stable version. So, we are sure that, its developers are preparing an increasingly better Windows.

So, what do you think about this new replacement of Photo application in Windows 10? Simply share your views and thoughts in the comment section below.