Recently, the new images of Nokia 1 and Nokia 7 Plus have been leaked, two smartphones focused on the basic and medium ranges, respectively, and whose official presentation will take place at the MWC, which will begin in just one week. One with Android Go and another with Android One, let’s see what they offer.

Contents show
New Renders Reveal The Nokia 7 Plus And Nokia 1 Design, Specs
Nokia 1, the most basic of Nokia
Nokia 7 Plus, the mid-range with Android One

New Renders Reveal The Nokia 7 Plus And Nokia 1 Design, Specs

Today, new images of Nokia 1 and Nokia 7 Plus have been leaked, two smartphones focused on the basic and medium ranges, respectively, and whose official presentation will take place at the MWC, which will begin in just one week. One with Android Go and another with Android One, let’s see what they offer.

More than a year ago the Finnish company Nokia’s CEO, Rajeev Suri made the announcement of the return of the Nokia to mobile phone manufacturing market. Who was the great world leader in the decade of 2000 was reborn in the hand of the startup HMD Global, a Finnish company formed by former employees of Nokia.

Among the bunch of phones launched by Nokia last year, there was some interesting mid-range model such as the Nokia 5 or, in premium range, the Nokia 8. But above all, highlighted the recovery of the legendary Nokia 3310, a phone with limited benefits to a price more than striking, $70, and all with a colourful design that triumphed between hipsters and modern.

Nokia 1, the most basic of Nokia

But let’s go to the images that appeared today. According to previous leaks, the Nokia 1 incorporates a Snapdragon 212 chip, with 1 GB of RAM, 8 GB of internal storage and an IPS screen of 720 x 1280 pixels. As for the design, it is not particularly attractive, more evocative of phones from a few years ago, although as a strong point, Nokia will offer the model in a varied and striking range of colours, as it did last year with the 3310.

As for the operating system, Nokia 1 will be the first Nokia phone to carry Android Go, the simplest version of Android for basic-range smartphones designed to optimize to the maximum, limited, resources available to the most basic phones.

Nokia 7 Plus, the mid-range with Android One

Another of the images revealed by Evan Blass correspond to the so-called Nokia 7 Plus. With a design much more in line with what you would expect, highlights the orange details on buttons and frames. Among the specifications with which they are speculated, we would be talking about a 6-inch screen with an FHD+ resolution of 2160 x 1080 pixels, a Snapdragon 660 processor, 4 GB of RAM and 64 GB of internal storage.

On the back, and according to the image, the optical group consists of two ZEISS sensors of 12MP + 13MP, allowing a 2x optical zoom. The front camera, also mounted by ZEISS, would reach 16MP. A USB-C type charging port with fast charging support and a microSD slot complete the filtered features. 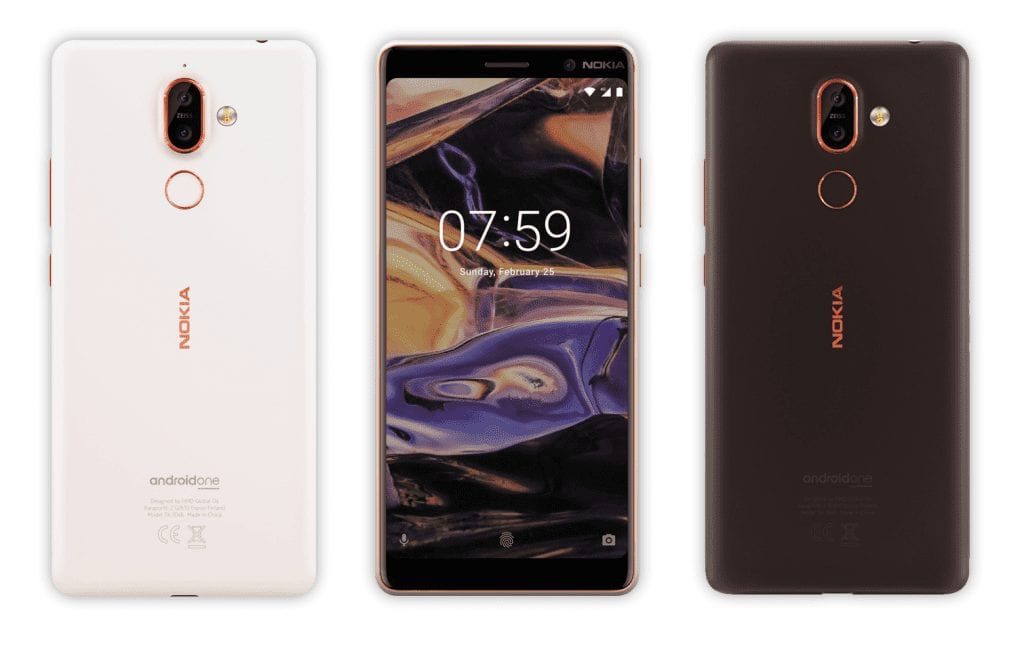 On the back of the phone, you can see the branding of Android One. And the Finnish company Nokia has opted for this version of Android, more simple, with which it is much more quick to provide updates.

So, what do you think about this two smartphones of Nokia (Nokia 1 and Nokia 7+)? Simply share all your views and thoughts in the comment section below.