Tech Viral
Home News Gadgets If You Have An Older iPhone With Slow Performance, A New Battery...

We all know very well that the problem of performance loss that appears in smartphones over the years. However, now according to the latest analysis, if you have an older iPhone with slow performance, then a new could solve your performance problems.

If You Have An Older iPhone With Slow Performance, A New Battery Could Solve Your Problems

Contents show
Does the iPhone 6S have performance issues?
But is this behaviour real?

Everyone knows the problem of performance loss that appears in smartphones over the years. This programmed obsolescence is, according to many, just a myth and everything is due to other factors, which do not go through the marks.

The truth is that there are cases where you can prove that slowing down can be triggered. A new case is emerging now and shows that the tech giant Apple may have made the iPhone 6S slower to prevent battery problems.

It’s common for new versions of iOS to bring performance and battery issues to older devices, something that the tech giant Apple quickly fixes in subsequent releases, bringing new life to those devices.

Does the iPhone 6S have performance issues?

A Reddit user, who saw the performance of his iPhone 6S decay over time, decided to make some comparisons with other smartphones, including that of his brother, who had an iPhone 6 Plus. However, after comparing both smartphones he noticed iPhone 6S, even though it was older, could get better performances than the iPhone 6 Plus.

After some analysis, and even with the replacement of the battery, something that many recommended, the behaviour in the performance evaluation apps turned out to be different, but always below expectations. The publication made by the TeckFire user on Reddit can be read below.

According to his idea, and based on the investigations he has done, the tech giant Apple will be limiting the performance of the iPhone 6S since the problems with the battery appeared a few years ago, and that caused this equipment to shut down or have loading problems.

What the brand is doing, according to this user, is to slow down the processor based on the battery power and its state, thus ensuring that the iPhone 6S achieves a longer battery life, sacrificing performance. This behaviour changes with the battery state.

To prove this, TeckFire user tested with Geekbench before and after replacing the battery, showing very different results in both situations. The tests also showed a performance lower than expected. 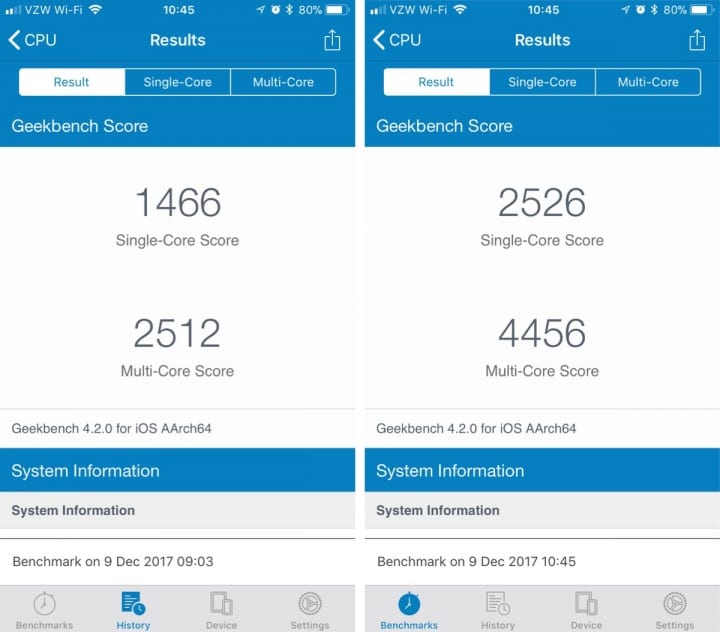 But is this behaviour real?

It is not clear that up to what extent this Reddit user is right in his analysis, but the truth is that a final test using the DasherX CPU app showed that the speed of the TeckFire iPhone 6S processor was clocked below expected.

For now, the tech giant Apple has not yet issued any statement, something that most likely will not, but the truth is that this is yet another case in which it tries to prove that the company changes the performances of their equipment to adapt to problems that arise with its functioning.