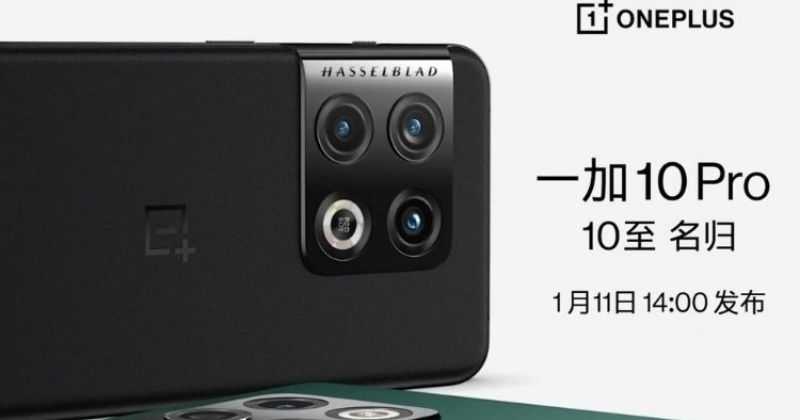 A Chinese smartphone maker OnePlus is set to launch the new device OnePlus 10 Pro, on January 11, 2022. The company has released an official teaser video that shows the first indication of the upcoming flagship.

The short video clip shows the new camera module, different angles of the device and reveals the launch date of the OnePlus 10 Pro. OnePlus 10 Pro was spotted on Geekbench, which shows a few specifications of the handset.

OnePlus 10 Pro launch will now be restricted to China, as of now. It is not revealed when the device will be available globally.

A tipster, Mayank Kumar, has posted a teaser video on Twitter that shows the features of the OnePlus 10 Pro. The device features a large rear camera module with three camera sensors.

According to the reports, the OnePlus 10 Pro will have a 6.7-inch QHD+ AMOLED screen display with a refresh rate of 120Hz. It is now confirmed that the device will come with a Qualcomm Snapdragon 8 Gen 1 chipset.

OnePlus 10 Pro will have a storage option of 12GB RAM and 256GB Storage. There will be a 48MP primary camera, 50MP ultra-wide-angle camera, and an 8MP telephoto lens.

The smartphone might be powered by a 5,000mAh battery that also supports 80W fast charging. There might be a square camera module placed at the edge of the rear panel and a triple-lens setup with LED flash. This camera system is powered by Hasselblad.

The video shows the launch date of the OnePlus 10 Pro, January 11. However, earlier, the date was reported as of January 5.