We all know very well that these days we are talking a lot about the OnePlus 6, one of the most anticipated mobiles of the moment recently we said that the smartphone would be a clone of the top of the range of Oppo (2019) and today, the appearance on the network of the features of the OnePlus 6, seem to give us the reason.

Contents show
OnePlus 6 Specs Leak: Here Is What You Will Get
Possible characteristics of the OnePlus 6

OnePlus 6 Specs Leak: Here Is What You Will Get

These days we are talking a lot about the OnePlus 6 and, as with the Xiaomi Mi 7, it is one of the most anticipated mobiles of the moment (as often happens every year) recently we said that the smartphone would be a clone of the top of the range of Oppo (2019) and today, the appearance on the network of the features of the OnePlus 6, seem to give us the reason.

Days ago the price of OnePlus 6 was filtered, a figure close to 750 dollars that has begun to worry, and much, to the fans of the firm, who affirm that this price is not identifying a phone that calls itself “flagship killer” Faced with this, Pete Lau has gone to Twitter to make a curious reference to the “overprice” of the current top of the market. A clue about the final figure of there flagship?

Beyond this controversy, today a OnePlus 6 specification sheet has been leaked on the Web. Of course, it is one of those leaks that we have to doubt their origin, however much they are in line with what has been rumoured on the phone in recent days.

Possible characteristics of the OnePlus 6

As we were advancing a few days ago, the new information about the OnePlus 6 resembles the terminal to the Oppo R15, the smartphone on which the phone will be based, just as the OnePlus 5T was based on the Oppo R11. The only difference that we could find between both Chinese mobile phones would be the processor. 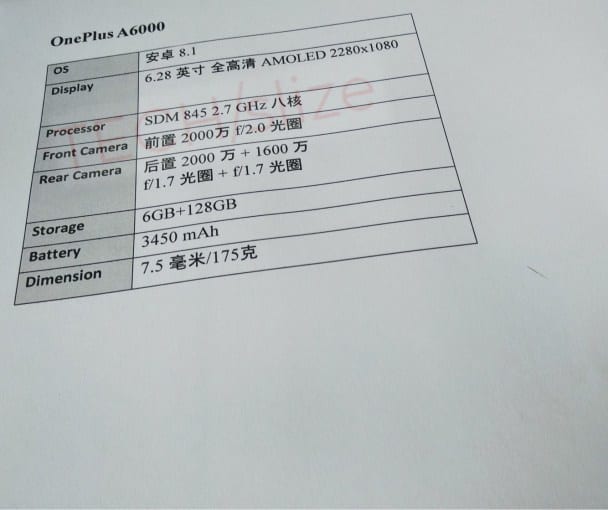 The list of features of the OnePlus 6 indicates the presence of the Qualcomm Snapdragon 845 CPU driving the terminal. These days there was the talk of a presence of 8GB of RAM and 256GB of storage, but the filtration shows a single variant of 6GB + 128 GB. It is likely that the 8GB model also hits the market.

Continuing with the filtered information we see that the OnePlus 6 will have an AMOLED screen of 6.28-inch with a resolution of 2280 x 1080. This would be the same panel as the Oppo R15
will feature.

In the back we would have a double rear camera, in this case, configured with two sensors of 16 MP + 20 MP with an aperture f/1.7. indeed, it would be the same system found in the OnePlus 5T. The improvements would come in the front sensor, which would now reach 20 MP in the OnePlus 6.

Now, if we talk about the other filtered features of the OnePlus 6 then let clarify that the new OnePlus 6 will come with Android 8.1 as an operating system, most likely with OxygenOS as a customization layer. In addition, there is also talk of a battery of 3450mAh. Again the same as we have in the Oppo R15.