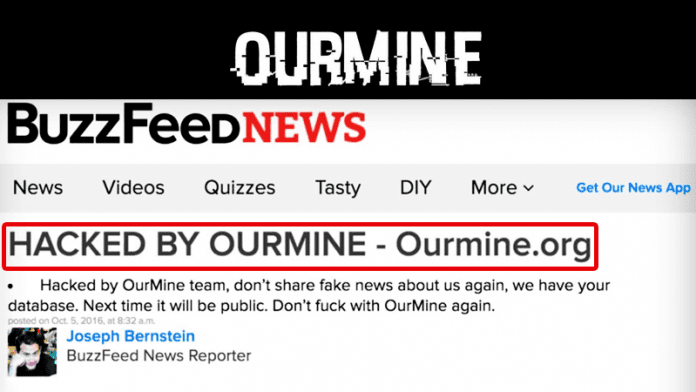 Do you remember the hacker group known as OurMine, many of you might be familiar with this hacker group who few months back claimed to have hacked some best accounts around the world which included accounts of the CEO and founder of Spotify, Facebook CEO, Google CEO and much more. Now it has claimed that it hacked BuzzFeed website.

A substantial number of posts of Buzzfeed was vandalized by a group of hackers calling itself OurMine in apparent retaliation for a story that exposes one of its members. Yes, you heard it right, it’s again OurMine, if you remember then you may know that “OurMine” is a hacking group. It is a group which uses hacks of celebrity internet accounts to advertise their commercial services.

Even a few of months earlier, this group had also claimed of hacking some best accounts around the world, which included accounts of the CEO and founder of Spotify known as Daniel Ek, Facebook CEO Mark Zuckerberg, Google CEO Sundar Pichai and like this it goes on.

The attack was to change the title of these web notes “Hacked by OurMine”, delete some of the texts of the stories and replace them with a note that demanded, “not to share false news about us anymore.”

The hackers also claimed “to have the database of Buzzfeed” and threatened to publish it. OurMine put on hold what information contained this database.

The attack came a day after the media published (history that appears, and restored to its web) about the group, which states that “a Saudi school with a strong obsession with football” is the main responsible for the attacks of OurMine on social networking accounts of Facebook and Twitter CEOs, Mark Zuckerberg and Jack Dorsey.

However, the hackers group OurMine posted on the website simply to notify the visitors about the hack that they manage to gain access and then the group threatened BuzzFeed with this message, “Hacked by OurMine team, don’t share fake news about us again, we have your database” read a message on various posts on the site on Wednesday before it was liquidated. “Next time it will be public. Don’t f**k with OurMine again”.

The hacker group initially denied information of Buzzfeed in a statement, stating that the detected person was “just a fan” of their activities. Today’s attack is a strange way to keep that point.

This is not the first time OurMine attacks a news medium. In July, the group accessed the system programming web TechCrunch, changing their logos and designs titles.

Even, OurMine has also been bestowed the attack on several celebrity Twitter accounts that occurred this year, including Katy Perry and Kristian Nairn, the actor who played the role of Hodor in the series of ‘Game of Thrones’.