Well, a few days ago we have seen JD.com teased the upcoming Redmi Note 5. Now, the Xiaomi Redmi Note 5 has been spotted again but this time the real-life image has been leaked which simply showing and confirming the specification of the smartphone.

As we have been seeing for a few weeks now, once all the high range of 2017 is presented, all the attention is focused on the terminals that we will see in 2019. The last one that has just been filtered in all its glory is the Xiaomi Redmi Note 5. It is a picture in which we can see not only the design of the device but some specifications that allow us to get an idea of what we can expect from Xiaomi’s new smartphone.

We found a smartphone with reduced frames and considerably thinner than its little brother, the Xiaomi Redmi Note 4. We also see a 5.99-inch FullHD+ panel with rounded corners, the aspect ratio of 18:9 and digital button on the screen, which leads us to think that, although there are no images of the back, it will be there where we find the fingerprint reader.

The device will have a body made of metal. On the right side, we will have the button to lock and turn off the device, while on the left side there will be the volume keys. Under the hood, we have MIUI 9 running on Android 7.1.2 Nougat (something that is revealed in the image itself).

As components, it seems that we will find a Snapdragon 625 64-bit and eight cores processor, which will be accompanied by the 64 GB of internal storage and 4000 mAh battery (which will not be removable). We still do not know RAM, although we do know that the rear camera will have a 12-megapixel sensor and a 5-megapixel front. 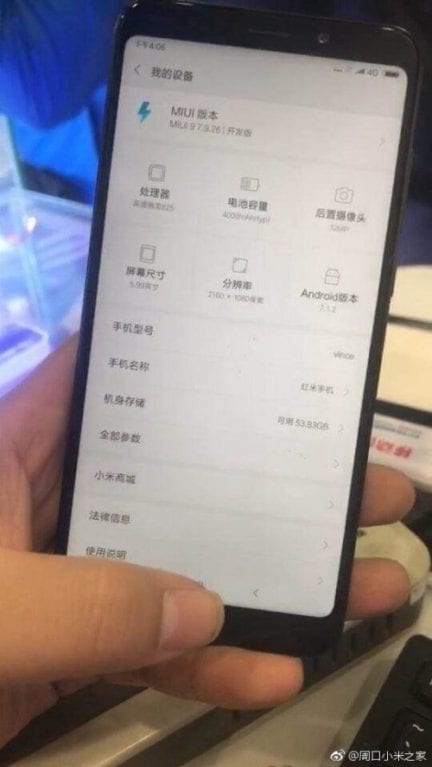 That’s all we know so far of this Xiaomi Redmi Note 5, although taking into account that Xiaomi always presents its devices at the beginning of the year, it would be normal that little by little, we will get more information as 2019 approaches.