WhatsApp is the most popular messaging platform in the world. However, it has became the target of new scams. If you use WhatsApp, then it is necessary for you to read this whole thread.

“Reliance Buys WhatsApp” Message On WhatsApp Is A Scam

If we give one dollar each time then there is a canard about WhatsApp, we could get the total hold of the convertible newsroom. The popular instant messaging application WhatsApp is one of the easy targets for deception, because you get a lot of users in a very short period of time, as the spread of false messages is almost faster than from our Facebook walls.

Recently, a new message being circulated from a so-called Director of WhatsApp, which states that “WhatsApp has been sold to Mukesh Ambani from Reliance, India for $19 billion”.

The most interesting thing about this hoax is the fake message itself bring a link on which once you click on it, the scammer makes money, and the recipient could be attacked by a malware or the device could get infected.

The fake message states that “Varun Pulyani the director of WhatsApp has sold the messaging platform to Mukesh Ambani, Reliance for $19 billion and WhatsApp is now controlled by Mukesh Ambani. So, forward the message to at least 10 friends or groups within 24 hours and then your WhatsApp will be activated for new services with Facebook and the WhatsApp logo which will turn blue”.

Hold on, not only that, but even the fake message also scares the user simply by saying that “if you does not forward it ahead, then your account with WhatsApp will be permanently deleted.”

Here is the entire message below:- 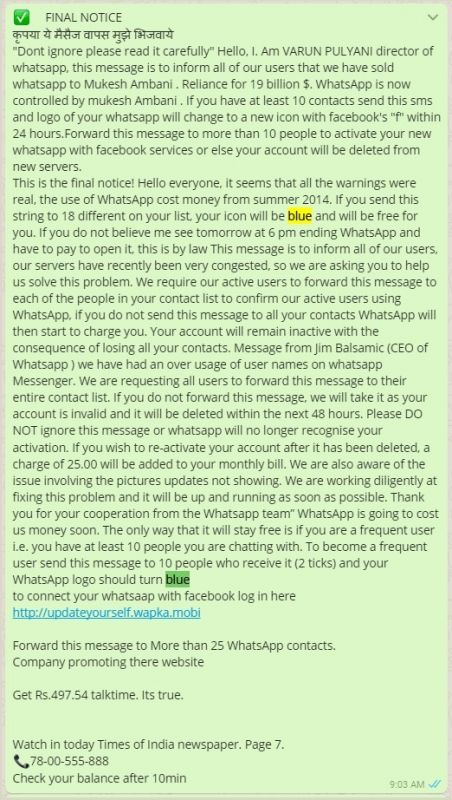