We all know that Samsung is working on its new virtual assistant which is set to debut with the Galaxy S8 and will be known as Bixby. However, finally Samsung confirms Biexby Virtual Assistant.

It is no surprise that Samsung is working to offer its virtual assistant, not only in its smartphones but in its wide range of home appliances and consumer electronics. Some information has already been leaked that pointed to the existence of this new virtual assistant.

Thanks to the registered trademarks and patents Bixby had known that was the name chosen for this virtual assistant Galaxy S8 among other devices. Well, Samsung has accidentally confirmed the existence of Bixby.

As we said, for several weeks we have been learning different information about the new virtual assistant that Samsung is already developing for its terminals and devices, a kind of Siri native to the Korean firm.

Virtual assistants are a feature increasingly present in different models from various manufacturers, from the Apple Siri to the Microsoft Cortana to Google, they all look for a partner for the terminals that can respond to our voice commands And perform different tasks.

That mission terminals and devices Samsung would be reserved to Bixby, technology like virtual assistant voice recognition being developed by Samsung and now has been seen with another signature service as Samsung Pay. 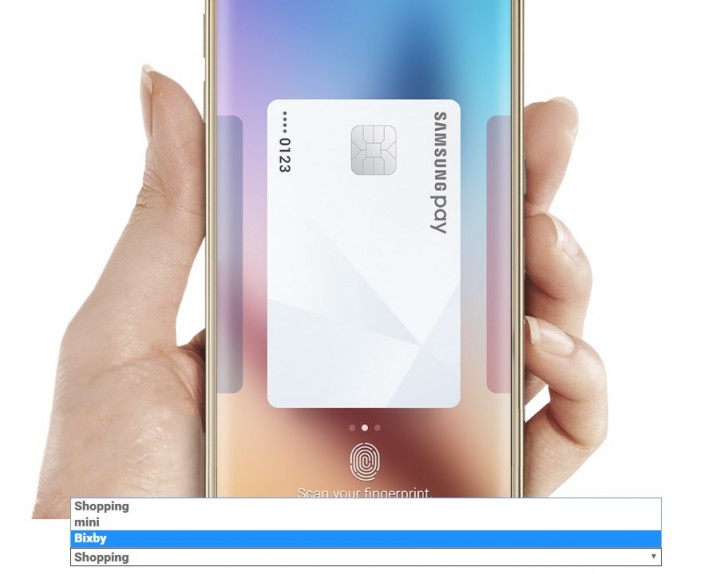 Specifically, all the hype generated has been produced by a shared image by Samsung on a website where you can see the existence of Bixby for Samsung Pay. In the attached capture you can see as options Shopping, Mini and the new Bixby, the virtual assistant of Samsung.

A virtual assistant is speculated to get integrated into the new Samsung Galaxy S8 which will be presented next spring, and so for the first time, Samsung offer a strong answer to the great existing virtual assistants.

It seems that what unveils this catch is that the new assistant will be integrated into such important company services as Pay. As we have known before, Bixby will not only be the Galaxy S8 assistant but will be present in other devices and appliances, such as laptops, televisions, refrigerators and in washing machines. This will also become the virtual assistant of Samsung Internet of Things.