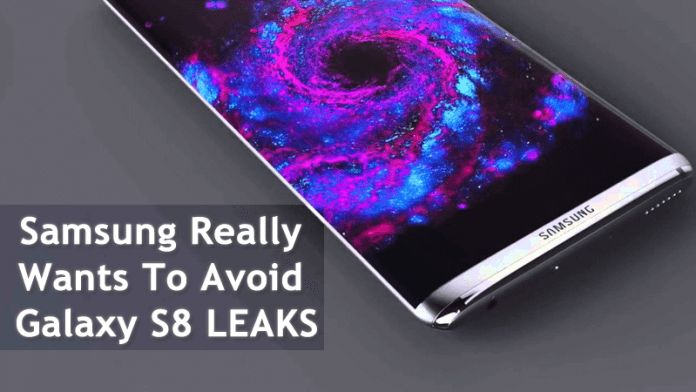 As we all know very well that after the failure and problems that Note 7 brought to the South Korean smartphone manufacturer Samsung, the company has now become very cautious with the new devices which are being manufactured.

After the failure and problems that Note 7 brought to the South Korean smartphone manufacturer Samsung, the company has now become very cautious with the new devices which are being manufactured.

As its next big proposal should be the flagship killer Galaxy S8, so, the South Korean smartphone manufacturer Samsung has warned all its employees to strictly prevent leaks of information on these new devices.

To avoid further problems and to regain the credibility that it had, Samsung is really trying hard so that the new Galaxy S8 get least exposed to the Internet. For this, senior executives from Samsung are trying to convince all its teams to keep the secret about the new smartphone.

In an email sent to all Samsung employees were asked that which are not revealed any information, otherwise, it can cause further damage to the company.

“Leaks of operational secrets can cause irreversible ramifications, posing a great financial risk on the company and leading to broken partnerships and loss of trust”. Furthermore, these leaks lead to that are broken bonds of trust with suppliers and ending partnerships essential to Samsung.

But the South Korean company went further and made the same request not only to its employees. To suppliers of parts of this devices was asked the utmost secrecy. The information came from an anonymous source connected to this supply chain.

“Samsung has Notified its suppliers not to mention a single word on the Galaxy S8”. However, the new element of the family Galaxy will reach the market in February next year and Samsung bet on it simply to win back the customers lost trust that was caused by the Galaxy Note 7.