Recently, GPD has launched a campaign on Indiegogo for its GPD Pocket laptop which is actually a 7-inch pocket computer powered by Intel Atom processor. As we told that it is a pocket PC, it means you can easily carry it around in your pocket.

Contents show
This Tiny Laptop Fits In Your Pocket, Runs Ubuntu Linux And Windows 10
The pocket computer that is more than a smartphone with a keyboard

This Tiny Laptop Fits In Your Pocket, Runs Ubuntu Linux And Windows 10

You may not remember, but there was a time when the words “pocket computer” were in vogue. The idea of putting your hand in the jacket and taking out a mini-pocket laptop with which to work and answer emails seemed the future of computing.

Now that we have smartphones capable of doing all that and more, the idea has been somewhat outdated. But that does not mean that it does not continue to have potential. The Pocket GPD is the first laptop that makes us believe that. In fact, it is the first time in more than a decade that the concept could really come true as we wanted.

The pocket computer (laptop) is literal, as the GPD Pocket is a notebook with measures of just 180 × 106 × 18.5 mm and a weight of only 480 grams. Let’s be clear that this is not a smartphone that uses a desktop interface on Android. Yes, it is a real computer, with a real keyboard and a desktop operating system.

In an ultra-portable format, its creators have opted for an Intel Atom processor x7-z8700 with four cores and a base speed of 1.6 GHz, will be enough to use programs and surf the web. It comes with 4 GB of RAM and 128 GB of internal storage.

Perhaps the most prominent hardware level is the screen, as it has a resolution of 1920 x 1200 pixels, but you have to keep in mind that it is seven inches, so you get a density of 323 PPI. That should elucidate into a clear and clear image, something necessary if we are going to work for a long time with such a small screen. In addition, the screen has Gorilla Glass 3 protection as well.

Now, let’s have a complete look at the specifications of GPD Pocket alongside the Apple MacBook and Microsoft Surface 3:- 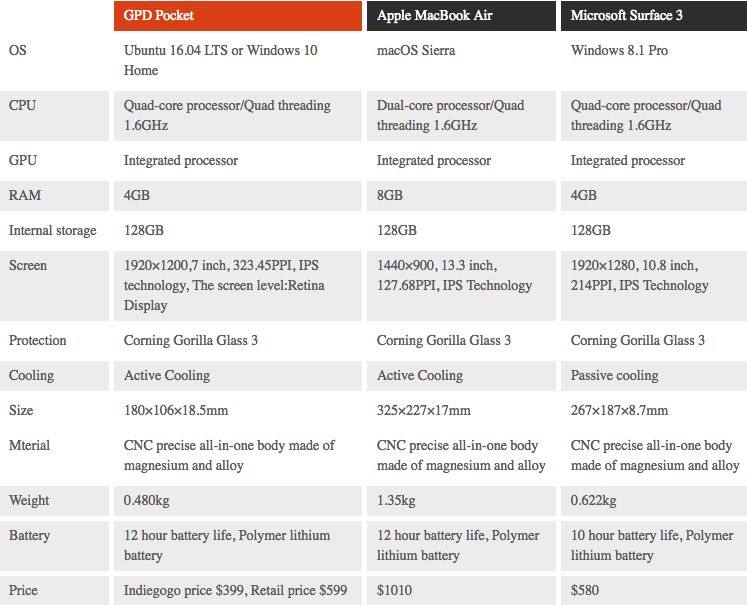 The creators of the Pocket GPD promise about 12 hours of use with the integrated 7000mAh polymer lithium battery and it should be enough for this pocket computer or laptop to accompany us throughout the day, ready to take notes or write an email.

The other great detail that makes different to the Pocket GPD is the operating system, as we can choose between Windows 10 and Ubuntu 16.04 LTS. Due to this unique feature, it simply makes a good option if you want to make the leap to Linux, or simply want to support a manufacturer that preinstalled the free system on their devices.

For enthusiastic and advanced users or programmers, the Ubuntu option makes a lot of sense as compared to Windows 10, the performance will be superior and the keyboard will be very useful to use the device. It can even be a good tool for system administrators, who can always carry work on top.

The GPD Pocket is available on Indiegogo, where it has already exceeded the amount it needed to be financed. But, if we talk about the price then this pocket computer or laptop will cost you $399 in Indiegogo and retail price $599. However, if you are interested, you still have two months to contribute to the project.