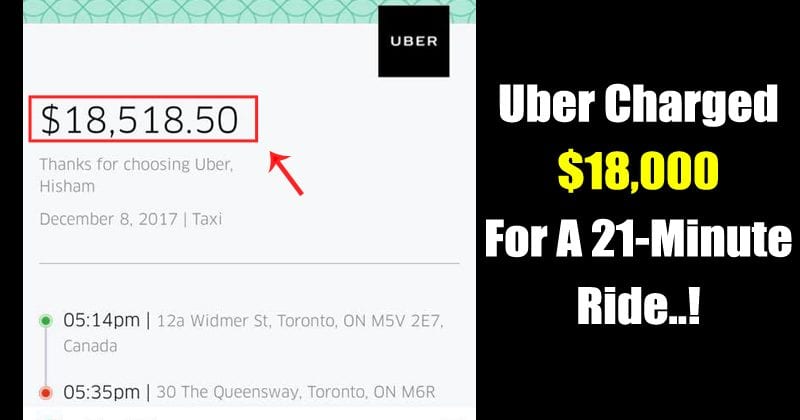 Apart from the security threats and data breach recently, a Canadian user of Uber ended up by checking his account in the red when the transport company, of course, Uber charged him more than $18,000 for a distance of about 8 kilometres.

If we look around, the threat of malware and viruses becoming more and more dangerous every day. In such cases, proper Antivurs solutions become our best friend. However, just imagine, what if the protector of your digital friend can’t be trusted? Yes, we already saw that how the well-known Russian Antivirus, Kaspersky was accused of stealing private information of users.

However, we all know very well that technological start-ups spend millions of dollars to find bugs in their apps, but sometimes that is not enough.

Uber, the private driver and cab service company that has become an alternative to the taxi has a staff of 200 security experts dedicated solely to look for bugs and exploits that endanger the private and billing information of its customers.

These 200 experts were not able to find a security bug that did locate an Indian hacker, as earlier we have reported. This bug allowed free travel with Uber cab anywhere in the world, without limitations. Luckily Anand Prakash is an honest hacker, a security expert who makes a living by finding bugs in third-party applications and collects rewards or you can say bug bounty as well for it. He immediately warned Uber and charged them $10,000.

Now, it turns out that a 20-year-old boy from Florida, with the help of another, violated Uber’s system last year and the company paid him a large sum of money to destroy the data and keep the incident a secret.

However, the global transportation technology company, Uber on board did not reveal identities or any information about the hackers or how the payment was made.

But, now apart from the security threats and data breach recently, a Canadian user of Uber ended up by checking his account in the red when the transport company charged him more than $18,000 for a distance of about 8 kilometres.

The trip should have cost around 10 dollars but for a computer error, the man was charged the astronomical figure of 18,518 dollars. More than one taxi driver must be laughing at the moment.

My friend was charged 18K for a 20 Min ride (!), and they are sticking to it. What in the world??? This is insane! @Uber_Support @badassboz @Uber pic.twitter.com/RjFihVLKIC

Emily Kannard, a friend of the victim, said Uber said it would not compensate the injured customer and retweeted his friend’s message. Some media echoed the news and the company reversed its decision and acknowledged its error.

“There was an error and it has been resolved,” Uber said in a statement. “We have provided a full refund to this passenger and we apologize for this experience, we have security measures in place to help prevent this from happening and we are working to understand how this happened.”