Recently, a study was done by the researchers which show that several popular Android VPN apps are not secure and even they contain malware.

Warning! These Android VPNs Are Not Secure

What is the main purpose of a VPN? In theory, simply to protect your data and browse anonymously and privately. However, we’ve talked on occasion that certain VPN services are insecure, and above all must take extreme caution of which are free.

Recently, a study by the researchers from Data61/CSIRO, UC Berkeley, UNSW Sydney, and UCSI demonstrated that many Android applications to create VPN not only protect your privacy but contain malware.

The vast majority of apps of this type that can be found on Google Play presents problems about data protection. So says a report by a subsidiary agency of the Government of Australia. It seems that virtual private networks are not as private as one would like.

According to the data, 18% of VPN applications do not encrypt the data of its users, and 38% contains malware or adware and 80% requests access to private data that do not really need and 84% leak user data. Two of the 283 apps even redirect traffic to servers for advertising purposes.

The promise of anonymous browsing is a hook that some developers use to get user data. As we all know very well that the Personal information is a gold mine because in the hands of the right companies can serve advertising to plague a mobile phone, if not directly to steal bank details as well. 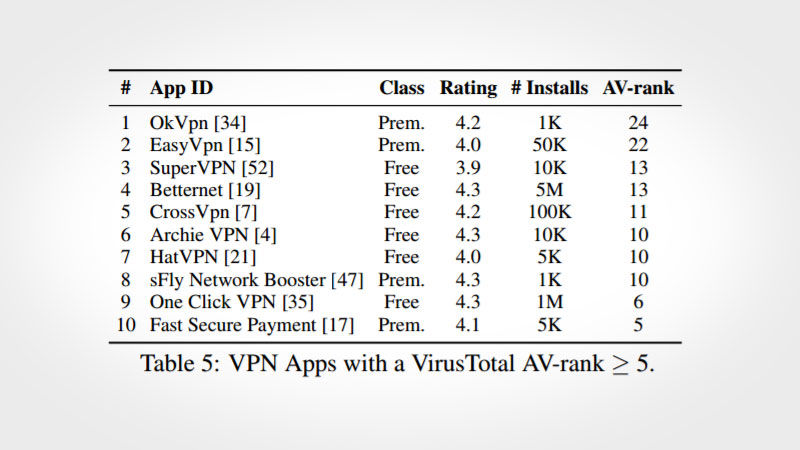 In addition to all these problems, the researchers analyzed users’ opinions about applications, and very few commented on security or privacy issues. It is paradoxical that applications that are supposed to be used to improve the privacy of users are used just for the opposite purpose. 75% of the analyzed applications using third – party libraries and 82% ask for permission to access sensitive mobile content, such as accounts and text messages as we already mentioned earlier.

So, if you are going to use a VPN, then simply you have to analyze its reputation on the network, as well as carefully you have to review the permissions that it ask for. If the service is free, then the privacy is probably non-existent and not only that even with the payment you have to keep your eyes out.