WhatsApp is undoubtedly the most used instant messaging application in the world but it’s not secure as this app which is actually used by the White House Staff simply deletes messages automatically once it has been read.

WhatsApp is undoubtedly the most used instant messaging application in the world. The application owned by Facebook managed to position itself as the favorite option among users when there were still many alternatives to it.

For many, WhatsApp is not the best messaging app. However, being the most used, it is difficult to uninstall it from our phones and start using another, since this decision will depend on our family and friends decided to do the same.

For many years, the WhatsApp application has taken its throne without needing to upgrade or add new features. But the competition tightens, and in recent months we have seen the arrival of many novelties to the app.

In addition to these new features that have already arrived, WhatsApp aims to go a step further and, in the coming weeks, will include a series of functions that will completely change how we use it. We are talking about the possibility of including a video in the profile, which will accompany possible changes in the interface.

But without a doubt, the most important news is that WhatsApp will receive the new Status feature in the coming weeks, which will turn the messaging application into a social network.

One of the weaknesses of WhatsApp is the security section. Although we have seen significant improvements in this regard, such as two-step verification, its developers still have a lot of work to improve further in this section. 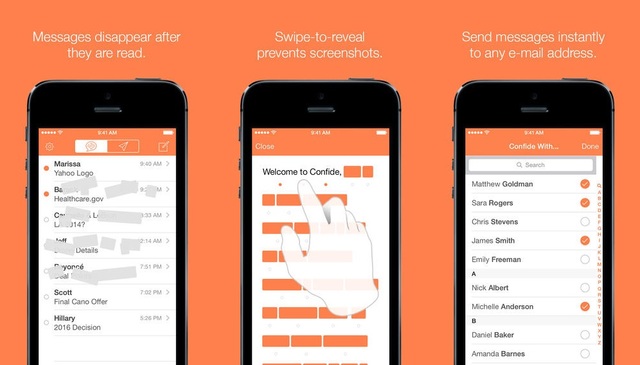 This is Confide, a messaging application with a system of messages that self-destruct and images that can not be fully reproduced. A good number of White House employees are very worried that they will be accused of leaking information to the press or being a victim of a hacker. This has led them to use this application to communicate with each other.

Confide is available for Android and iOS and has a free version that includes all the features we have named. Each word is hidden behind an opaque block when a message is received. To read the message, we must click on the blocks, and they will disappear. If the received text contains several lines, we must lower our finger to read them, so that the top lines will be hidden again. In this way, the text can never be viewed completely; this prevents screen captures of messages can be made.

In the case of the images something similar happens, they appear blurred, and the user must pass the finger over to be able to view them. Images, texts, and audios received are self-destructed once they have been read and data is not stored on any server. In the paid version, we find new functions, such as the possibility of deleting a message that we have sent but that the receiver has not read.

According to several media outlets covering White House information, this application is being used by a large number of workers.

Some websites have doubted the possibility that Confide is the most secure messaging application in the market. Undoubtedly, the publicity obtained by the app after the publication of this information will make its position in a preferred place within this market.