We all know that Xiaomi Meri has been spotted multiple times in leaked images and on benchmarking websites. But, now Xiaomi’s Meri smartphone was again spotted at the benchmarking website Geekbench running on Android 7.1.1 Nougat which is expected to feature company’s in-house SoC Pinecone.

It was just over a week ago that the world learned that Xiaomi was also going into the processor business for its smartphones. Everything indicates that the first Pinecone is placed in a model that will be presented already next week, in MWC 2017, the Xiaomi Mi 5C.

To anticipate this release, the result of a benchmark test of a Xiaomi smartphone that is speculated to be the one that integrates the Pinecone.

Xiaomi now has a strong dependence on the Qualcomm processors in its top models and Mediatek for the mid-range, but it is certain that this will soon decrease. With company’s in-house SoC Pinecone, the brand aims to create the necessary independence of other manufacturers and to control all manufacturing processes.

Xiaomi is expected to present to the world a new member of the already large family Mi 5, the Mi 5C with the possibility of already being equipped with the first Pinecone, more properly the Pinecone V670, An octa-core processor which is actually clocked at 1.4 GHz.

Geekbench has already released some results

In GeekBench came a benchmarking result today regarding a Xiaomi Meri that should be the Mi 5C. In this test now revealed, this device achieved the score of 679 at the single-core level and 2421 in the multi-core, a result that in itself is not surprising. It is also known that this new smartphone will already come with Android 7.1.1 and that will have 3 GB of RAM. 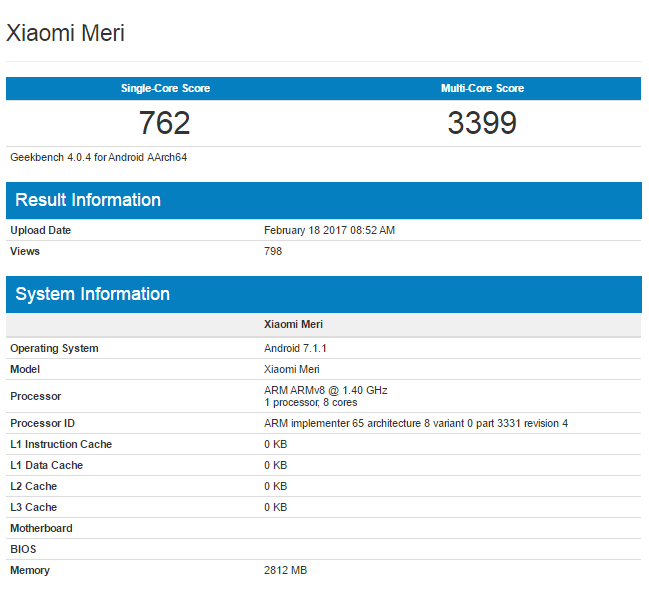