We all know very well that the Chinese smartphone manufacturer Xiaomi’s Mi Mix was the first major smartphone that had the design of a prestigious industrial engineer. Now, the alleged Xiaomi Mi Mix 3 rear panel reveals iPhone X like-design.

Many of you will think that it is too early to talk about the Xiaomi Mi Mix 3, when it is not even three months since the well-known Chinese smartphone manufacturer Xiaomi has launched Mi Mix 2, which, by the way, has officially arrived in India. Well, although it may seem soon, the design of the Xiaomi Mi Mix 3, at least hypothetically, can be seen in a new real image which is just leaked.

Just a few weeks ago, the Chinese smartphone manufacturer Xiaomi presented a new edition of its Xiaomi Mi Mix 2, the Bezel-less smartphone that competes in the high range with a price that is less than half as compared to some of its direct competitors.

As you know, the Xiaomi Mi Mix was the first major mobile from the Chinese firm that had the design of a prestigious industrial engineer, such as Phillippe Starck, and without a doubt, it was the starting signal for the large screens without borders between the high range of smartphones that we have seen in 2017. Well, the image of a back panel with the design of the Xiaomi Mi Mix 3 has been filtered, at least that is what the source that has filtered it suggests, and the design is surprising. 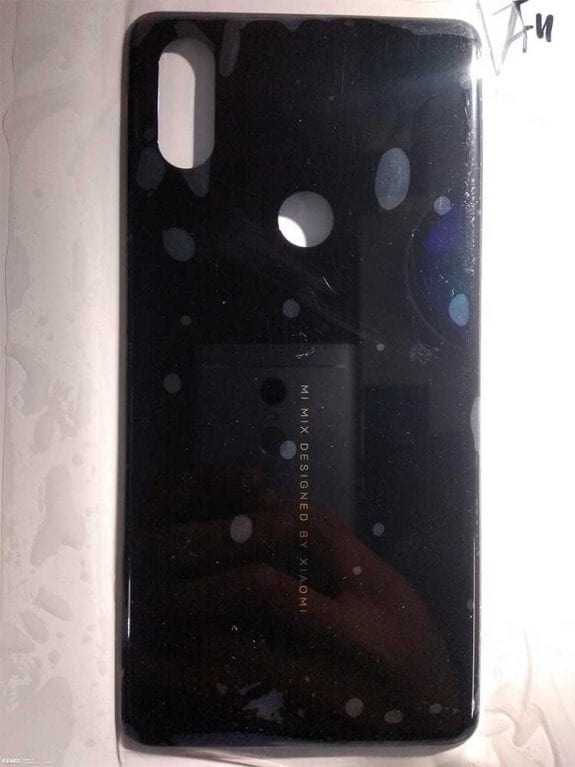 So far the two generations of the Xiaomi Mi Mix have had a simple and elegant design, single-sensor photo camera, far from the dual cameras that already dominate not only the high-end but many models of the mid-range.

A traditional camera that gives an even more elegant and conservative look to the terminal. In this filtered image, however, we can see the back cover of a Xiaomi Mi Mix, since the inscription at the bottom reveals it.

In this case calls especially the hole for the camera, which as you can see would be vertical and would be located in a place similar to the iPhone X, and of course, because of the space it occupies, we would be talking about a dual camera in any case.

In the same place we have seen in the first two generations of the Xiaomi Mi Mix, the fingerprint reader would be located, right in the centre, under the camera in the previous models, and now far from it.

We must take this image with some caution, since as you can imagine, although its appearance is real, it could be a good way of discarding of previous models. More than anything because we would be surprised if Phillippe Starck starts to clone the design of the iPhone X in the future.

So, what do you think about this leaked design of Mi Mix 3? Simply share your views and thoughts in the comment section below.