Google has announced a new feature for its upcoming Operating System, Android 12. The news comes from the Game Developer Summit 2021 event that is going on from 12 July to 13 July.

At the event, the tech giant has announced a new dashboard for games in Android 12. With this, it will be easy for you to access screen capture and recording. The game dashboard will be available on selected devices later this year. 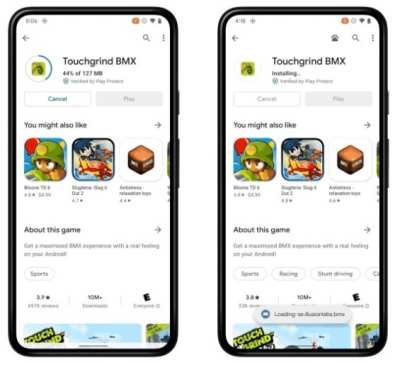 The feature for Android game developers will be 2x faster from starting a download in the Google Play Store. Google has announced a feature called “Play as you Download.” This means you will be able to play games before the download process is completed.

Already Google allows the users to try the game before downloading, but it is limited to a small part of the game. The changes will be done as a part of Android 12 update that is coming in September.

The management director Greg Hartrell says the installation process is canceled because it takes time for users to download games and then start playing.

The new feature of Android 12, “Play as you download,” is now available for all the developers who publish games by using the Play Asset Delivery system. Once the feature is out, users will notice the change in speed. This Android 12 feature will be helpful for large games, as you don’t need to wait for a long time to start playing.

This is not the first time Google is making games load faster. The company is already offering a similar feature with “Google Play Instant”. It lets the gamers start the game immediately from Play Store.

Android 12  is set to bring so many changes to Android OS; even it is bringing a new design.