Google will soon roll out a new Android Operating System Android 12. Soon, we will see the developer preview of the OS. However, before the release, we have already seen much news on Android 12 features, and still, it continues.

Now, there are reports that Google is working on several other changes like a stashing feature for Picture-in-Picture windows, one-handed-mode, UI changes like “Material Next” design, a smarter autorotate feature, gaming mode, and more. However, all these features are expected to come as it is not officially confirmed that these features will make their way to the Android 12 official version.

Let us check out the latest features of Android 12 that have come out.

Latest Features of Android 12 that Might Come into Stable Release 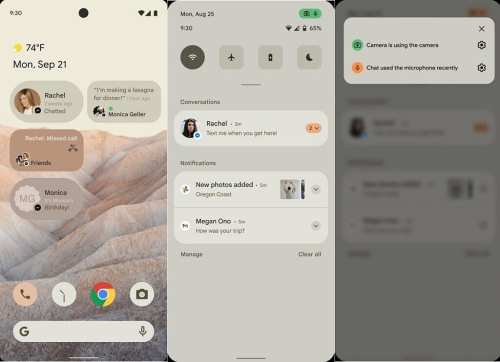 Many times the auto-rotation on the smartphone is turned ON and we don’t know. And when the phone screen is rotated when you don’t need it, it is very annoying. But now, it looks like autorotate can become a smart autorotate feature in Android 12. As Google is working on this smart feature. However, no other details are out, but this feature might come in the update.

Google is working on a new “Game Mode” in Android 12. It is a new GameManager Service that is different from the existing GameManagerClient, a part of Google Play Services that is used for managing the gaming sessions. “GameManager” service is called a service to manage the game-related features.

This service can manage the game mode and persist the data across reboot[s]. There are no details on, what this feature can do. But we can assume that this “gaming mode” might manage few basic settings like autorotation, automatic brightness, and more.

Google is working on a new feature called “Reduce Brightness”, this feature is originally known as “Reduce Bright Colors”. It is meant as an accessibility feature to aid with visual impairments. It is said that it will be a part of the default set of Quick Settings tiles for the new users of Android 12.

This mode was first introduced for Android Oreo phones, after that it was seen with few functional updates. Then in Android 11, Google added the ability to resize PIP windows.

Luckily, Google is bringing a new way to resize Picture-in-Picture windows in Android 12. With this, you can pinch to resize, double tap to automatically resize the window to its maximum size. When resizing, a crossfade animation will be used. In Android 12, Google is also preparing to add the “Stashing” feature to PIP windows. With this feature, the users can temporarily hide the PIP window by dragging it to the edges.

In the New animations for bubbles, there will be a fading down animation when you drag out the expanded bubble, collapse animations, and a transition between bubbles. You will see bubbles in a vertical position on the left/right side in landscape mode. Google will also allow flexible bubble sizing and enabling the fixed position.

Dessert Name could be “Snow Cone”

Google has not officially confirmed the dessert theme of Android 12. When Google will release the stable version of Android 12 later this year, you might notice the development branches are prefaced with “snow cone”.

Normally, Google apps follow the company’s “Material Theme” design. However, the exact charges that will come in design Material “NEXT” are not known. “NEXT” might be the actual name of the new design guidelines.