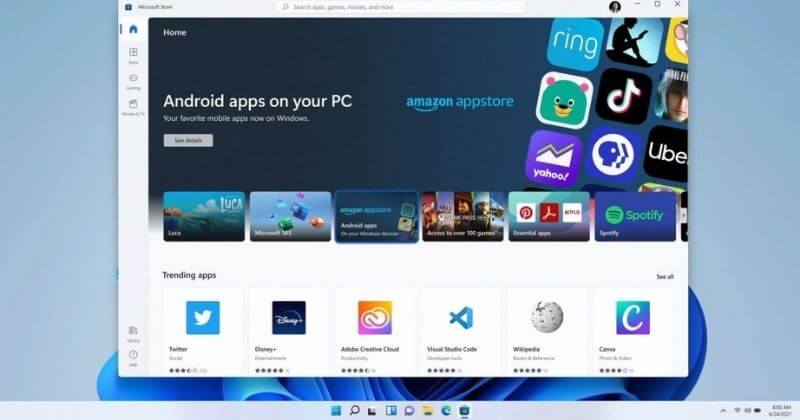 Microsoft has rolled out Windows 11 build update to Windows Insiders. The update brings back the date and time taskbar and a few more other features, including taskbar weather, Teams integration, and more.

Last month, Microsoft announced that Android apps support will arrive in February. So, here it is, Windows 11 now supports Android apps through Amazon Appstore. However, the update is still in preview.

The company has joined hands with Amazon to bring Amazon Appstore to the Microsoft Store to allow Windows 11 users to download the Android apps and games on PC.

The public preview of Apps and games will be available on Windows 11 from Tuesday in the US. The latest update also brings improvements to the taskbar.

All the Windows 11 PC will now show the clock and date on the taskbar. Moreover, Microsoft has redesigned Notepad and Media Player apps.

The company has announced that more than 1,000 apps and games are available on Windows 11 from Amazon Appstore. Apps like Uber, Audible, TikTok, and games like Subway Surfers can be downloaded.

Microsoft has minimum system requirements like 8GB RAM, SSD, and a compatible processor.

“To get started with the preview, open and update the Microsoft Store (click Get updates in Microsoft Store > Library) search your favorite titles or explore our new curated collection of mobile apps and games; when you’ve found what you’re looking for, download them through the Amazon Appstore.”

Earlier, also we were able to use android apps on Windows with the help of emulators like Bluestack. But now, there’s no need as the apps are natively supported.

The latest Windows 11 update is now rolling out globally, but the Android apps support is limited to the US.